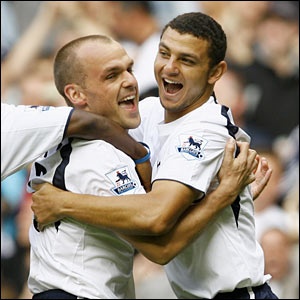 Nash’s favorite soccer team, Tottenham Hotspur (aka the Spurs), went on the market. Nash said he would be interested in being part of any group that seeks purchasing the team.

Ignoring the awkward grammatical structure of that second sentence (seeks purchasing?) this is pretty cool news. And not entirely implausible. Nash certainly isn’t wealthy enough to purchase the team outright, but he can kick in a pretty substantial chunk (it’s not like he’s spending money on clothes). And other, higher-profile Premiership teams have been sold to American groups already.

Here’s what I find the most interesting, though. Nash has been a football fan—more specifically a Hotspur fan—for a very long time. His brother, Martin played soccer for the Canadian National team, and his father, John (who is originally from Tottenham), played semi-pro in South Africa. Nash himself played soccer throughout high school. And Tottenham Hotspur has a rich history—they won the League and FA Cup Double in 1961—but little recent success (the highest they’ve finished in the Premiership era is fifth).

So I guess my question is this. If a group including Nash does purchase Hotspur, how soon does he become Mark Cuban?