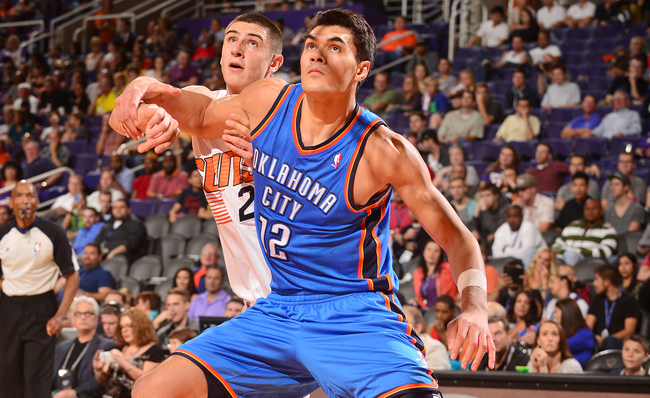 In his first NBA season, OKC Thunder big man Steven Adams got under the skin of just about every opponent he faced.

Zach Randolph was suspended after punching Adams in Game 6 of the Grizzlies-Thunder first round series, and seems to think he’s a dirty player. Vince Carter, who’s also been suspended for striking Adams says players simply have to get used to him.

As for Adams himself, he naturally feigns ignorance about why so many people seem to want to hit him.

“I mean, seven players have gotten suspended because of him. You’ve got to look into that,” Randolph said. “Why are players getting into it with this particular guy?” […] “Honestly, I feel like that was his whole plan and I fell for it,” Randolph told Memphis reporters Monday. “I take responsibility. I’m too old for that … to get me off of my game and I went for it. It bothered me all summer. That was their plan.”

“No, not at all,” Adams said Tuesday, hours before facing the Grizzlies in the Thunder’s preseason home opener. “I was just playing hard. I mean, it’s unfortunate that it happened. Honestly, I was just focusing on the game.” […] “I probably just say aggressive,” Adams said (when asked to describe his style of play.) “Coach tells me to do one thing then I’ll just go do it. It’s pretty simple. Just go rebound or something simple like that. I just do the best I can. Just hustle.”

“He’s just aggressive,” Vince Carter said of Adams. “Some can deem it borderline. He fits the mold and gives them a presence. He’s one big human. That’s just what they need down in the post. [Kendrick] Perkins has been that type of guy for many years. So to have another guy being groomed into that role is great for them. […] There are a lot of guys who have fallen for it. It makes it tough because he’s a very aggressive player. He’s doing what he needs to do to be in this league. It’s all about adjustments. When you know a guy plays that way and you know it might not be legal you just have to figure out how to handle it.”