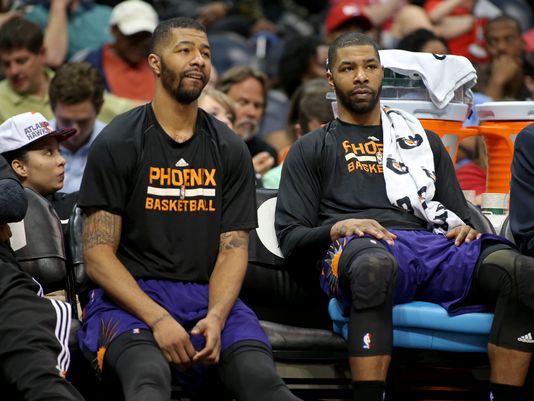 The police in Arizona are investigating Phoenix Suns forwards Marcus and Markieff Morris for an alleged assault.

To date, no arrests have been made nor have any charges been filed.

The twin brothers are being accused of participating in a vicious beatdown of an old family friend back in January.

The Phoenix Suns’ Morris twins live by the mantra “Family over everything.” […] Phoenix police say Marcus and Markieff Morris put those words into action when they and three others committed felony aggravated assault against a man the 25-year-old twins learned had sent “inappropriate” text messages to their mother.

For their part, the Morris twins have denied assaulting the reported victim, whom they also claim not to know, and their mother denies having been in contact with the man on the day of the incident, though authorities found evidence to the contrary, the police report shows. […] The report shows the alleged victim, Erik Hood, told police he had been a mentor to the twins and supported them financially for a time when they were high school students in Philadelphia. Hood, a former professional basketball player who now works as a talent scout, also showed police photographs of himself with the Morris twins, the report said.

Witnesses told police they saw the five subjects flee in a Rolls-Royce Phantom, but none of them were able to identify any of the subjects. Investigators reportedly interviewed about two dozen additional witnesses who said they did not see anything or could not identify those involved. […] Hood, who later identified (Julius) Kane and the Morris twins as three of his five attackers, suffered a broken nose, a large knot on the back of his head and abrasions, records show. The woman who accompanied Hood to the game also verified Kane and the twins as being part of the altercation.