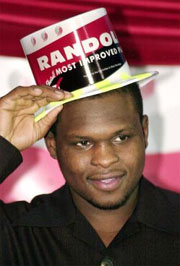 I saw a headline late last night within the basketball headlines on the front of SLAMonline that read:
Randolph “involved” in sex assualt claim (AP)

I had a pretty good idea which Randolph they were talking about, and it wasn’t Shavlik. In this case, it was Zach Randolph, the Portland Trailblazers forward who celebrated his ascent to the NBA by being convicted on underage possession of alcohol, punching a teammate in the eye and getting charged with a DUI, all in his first two seasons.

He seemed to straighten up and broke out in 2004, winning the Most Improved Player award and being rewarded for his hard work on the court with a six-year, $84 million contract, the largest deal in Blazers history.

He commemorated his big payday by being present while his brother allegedly shot three people in a bar dispute, though Zach was never charged in that case.

Following that incident, Blazers president Steve Patterson said: “Although there were no charges, Zach and for that matter all of our players, need to be aware of their surroundings and work hard to not put themselves in compromising situations. In accordance with our pledge, we will continue to work with our players to make sure they understand what it means to be a Portland Trail Blazer and the responsibilities that go along with representing this community.”

After that incident, Patterson said: “During the past few years, we have tried to hold our players to a higher standard of accountability and behavior. Even though Zach did not break any laws, his involvement in this matter showed poor judgment, and he fully understands that he needs to take more responsibility for his actions.”

Which leads us back to the initial headline. Portland police have announced that they’re investigating a complaint of sexual assault that may or may not involve…Zach Randolph. (Strange that they’d go ahead and throw his name out there, isn’t it?) The Oregonian says that last week, Randolph and another man were in a Portland hotel room with two women. When they all left the hotel room, one of the women went to a hospital and called the police; though her injuries have not been disclosed, the woman supposedly had to spend a few days in the hospital.

Obviously, Randolph has not been charged with anything, and my job isn’t to pronounce his guilt or innocence in this current matter.

There is one thing we can pronounce him guilty of, though: horrible judgement. The Blazers keep making excuses for him, and he keeps putting himself into bad situations and taking advantage of the team. Since signing that deal, Zebo’s scoring has gone down each season as he struggled with a knee injury. And while he has some nice moves in the post and solid jumper, I still think he’s one of the worst passers out of a double team in the NBA. That’s a facet of a basketball player’s game that generally improves with time, though Randolph just hasn’t gotten any better at it yet.

There’s a lot of Blazers fans out there who hope, year after year, that this will be the year the team puts it all together, that the team will leave behind its troublemaking past and “Jailblazers” nickname. But until the front office shows that they’re serious about this kind of nonsense and they’re willing to take a stand — and I mean either a long suspension or an immediate trade — the Blazers will remain the punchline to the jokes about the NBA’s misbehavior.