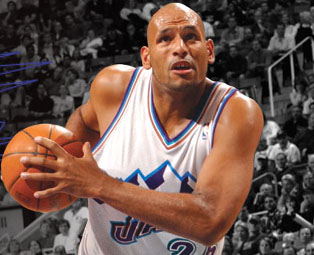 It’s hard to imagine a basketball “news” story that could be as simultaneously overwhelming and underwhelming as John Amaechi acknowledging his homosexuality:

Overwhelming, because as far as anyone can remember, no current or active NBA player has ever done this, making it potentially newsworthy and groundbreaking and incredibly socially relevant;

And underwhelming, especially for the kind of people who read SLAM, because John was never any of the things that most of you care about in a basketball player. He’s not hip-hop. He’s not gangsta. He was never smooth or athletic or dynamic on the court. Most important, at least at the pro level, he just wasn’t that good.

So maybe you don’t care — and if you don’t, seriously, stop reading now — and maybe I wouldn’t either, except that I know the guy. Penn State being a huge university, I don’t remember if we ever had any actual classes together, but John Amaechi and I were essentially classmates at PSU in the mid ’90s. More directly, I covered the men’s basketball team as the beat writer for our student paper during John’s senior year. The team was decent (NIT Final Four) and John was first-team All-Big Ten, and over the course of following the team all season, I got to know him relatively well — well-enough, at least, to write a really corny feature about him. At least my writing has gotten better. I hope.

The singular thing about John was just that: He was always unique. Always, and in all ways. He was was All-Big Ten, but he wasn’t really a very good basketball player, at least not by any standard definition: Couldn’t jump, wasn’t particularly graceful — he just never looked the part, but he practiced relentlessly and made it work (and that just came down to pride and love of the game; dude would run pick-up with anyone). As stated, he’s English, and before Luol Deng, the idea of a top-flight English ballplayer literally seemed alien. He never tried to play the tough guy (although he was tough on the court –you don’t average 10 rebounds a game in the Big Ten if you’re not), never talked sh*t on the court, just never fit the part, especially in the Fab Five, Big Dog, Bobby Knight era of Big Ten hoops.

But you know the most compelling thing about John Amaechi, at least if you went to Penn State in the mid ’90s? He was the most popular guy on campus.

Understand, this is the equivalent of some linebacker from the football team at Kansas or Duke being the biggest celebrity in town: It’s not supposed to happen. Penn State is was and always will be a football school, and yet this guy, on force of personality, just owned the school. You could just tell, without the slightest trace of arrogance on his part, that John was smarter and more approachable and more thoughtful than any of the other big-time athletes on campus, and pretty much the rest of the student body in general. Dude was just… cool.

He was also, even then, gay, and a lot of us knew it, or at least assumed it. I mean, I didn’t have the evidence to prove it in court, but part of it was just his manner, the way he carried himself — pardon the stereotypes here, but this is truth. John wasn’t what anyone would describe as “flamboyant,” but the whole half-innocent / half-ignorant “Is he gay or just European?” jokes were common, if sort of quietly so. For starters, no one was really sure — he was really close friends with a girl on the volleyball team, and a lot of people assumed they might’ve been dating. I didn’t rule it out, but if I’d had to put money down…

And then there was the openly-gay guy I worked with at the student paper. The joke with the rest of us halfwits on the sports staff was, “Yeah, he’s gay, but he knows more about college basketball than anyone we know, so he must be OK.” And he did know more about college hoops than pretty much anyone I’ve ever met; this guy actually spent his spring break one year traveling to a bunch of the small conference tournaments — MAAC, So-Con, whatever — just straight hoop nerd stuff that you had to appreciate. We were cool, and at some point I asked him about John. His response: “Oh, yeah. He’s definitely gay. Everyone in the gay community here knows it.”

So why not come out back then? Why not parlay the popularity and respect he had on campus, and in the community in general? Well, if you’ve ever been to Central Pennsylvania, you might have an idea. Progressive is not a word often associated with this part of the world, which is why a coach like this has total job security around here. (Of course, unlike the men’s teams, hers usually win…) So, I can’t blame John. Maybe at the time even he wasn’t really sure. He might’ve also known that a lot of his charity work — he was actively involved with the Big Brothers program, and he’s been a tireless activist for child welfare — would’ve been looked at differently, which would’ve been an incredible shame. I don’t know. All I know is, he didn’t come out, and no one ever felt compelled to push him out, either.

Anyway, fast-forward: John doesn’t get drafted, then he gets a free agent chance with the Cavs and doesn’t do much with it. Goes to Europe for a couple years, comes back and has a shockingly strong run with the Magic (10.5) in ’99-00. After another year in Orlando, he ended up in Utah, which seemed like a really horrible place for a cultured, liberal, British black guy even if he’d been arrow straight (and even if Jerry Sloan wasn’t ALLEGEDLY a homophobe, which we may be hearing much more about soon.) Then, a brief stint in Houston, and then, dunzo. Last I knew he was back in the UK, where he’s apparently stayed pretty busy with work that’s both socially relevant and focused on helping establish basketball as more than an afterthought to soccer, cricket, rugby and (no joke) darts.

Until sometime last year, I hadn’t seen or talked to John in a while. I always made a point to see him and say what’s up when the Magic or Jazz came to the Garden, and we might’ve traded emails a few times, but that was it. Then, maybe 6 or 8 or 10 months ago, we heard a rumor that espn books was planning to publish his “tell-all” memoir, in which, among other things, he’d come out of the closet. Soon as I heard this, I emailed him telling him I’d heard he had a book coming out, and that I’d heard it was going to be “interesting.” His reponse was intentionally vague enough to neither confirm nor deny anything, and I let it go. And then, this week, the rumors have proven true.

I’d been telling my SLAM co-workers for years that I was pretty sure of this, and plenty of people in basketball circles had an idea. There was just never a way for it to be brough into the light unless John brought it himself. My man Dave Jones, who you might not have heard of because he works in Harrisburg but is, for my money, one of the better college hoops writers in the country, nailed that topic (and a lot more) in a great column today.

Even before the book rumors and that email exchange last year, primarily while he was still in the League, I’d been tempted to ask John if he was gay. I didn’t, I guess, because I don’t know him that well, and because it wouldn’t have been any of my business unless he’d wanted it out there. My thought, I guess, was that any impact it might have would be a lot more powerful if he was still an active player. I also thought it would be a cool article to write. But I never asked, and now we’re all going to be inundated with the worldwide leader’s multimedia coverage for the next few days.

Of course, I’ll watch. As much as I hate that network and its magazine, they’ve got the story, and it’s a story I’m interested in, even have a stake in (who knows, dude might end up on the cover of my new mag before too long…) But after espn’s media blitz, I’m guessing there won’t be much of a shelf life for this story in the U.S. All-Star’s coming up, and then it’ll be time for the playoff push, and basketball fans, SLAM readers in particular, will have a lot more relevant sh*t to talk about than a mediocre ex-player who happens to be gay.

And that’s the thing I’m disappointed about. I’m disappointed I didn’t get to write some big-buzz story while John was still playing, which would’ve raised a lot of issues that would’ve had to be addressed. As it is, a bunch of John’s former teammates and random guys in the League will be asked about this in the next couple days, and most guys, no matter what they actually believe, will be smart enough to give controversy-free answers if they answer at all. But if this had come up while he was still on a roster? There would’ve been drama, and it would’ve been fascinating to watch.

Of course, it probably would’ve been too much to deal with, even for a guy like John, which is probably why he wouldn’t have — couldn’t have — done this while he was in the NBA. And I can only respect that. Hopefully, the next guy who comes out will be a better player, a player kids can identify with, and he’ll find the courage to drop this bomb while he’s still on an active roster. I’m definitely not holding my breath.