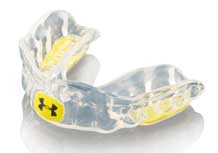 I thought before I describe the second day of testing, I would answer some of the questions I’ve received in regard to the Under Armour Performance Mouthwear with “Armour Bite” Technology (Armour Bite) which custom fitted, retails for $495 (that’s question 1). The second issue I did not address the first time around is the actual placement of the device. I know a lot of you are thinking the mouth piece covers the top of the teeth — I know this because when I first received it I thought the same thing. When my mouth was fitted, they took impressions of my entire mouth. I figured like most mouth pieces it would cover my front teeth, however when I received it and attempted to put it on, it was noticeably small.

At first, I cursed the dentist who took the impressions thinking he put the wrong addresses on the moldings. Giving it one last try, I slid it on my bottom jaw and it fit like a glove. I am sure I was told this down in Florida, but I may have been too giddy with excitement to hear. I almost omitted this story because I was afraid the comment section would be filled with hurtful phrases like, “He’s a big dumb animal ladies and gentlemen.” But I figured I needed to tell it like it is despite the ridicule I may endure.

Back to the testing… While reading the pamphlet I was given at the Global Symposium, I immediately felt this could be beneficial to me when lifting. While pushing out the last few reps of heavy weight, I constantly mash my teeth together. Little did I know that I was not increasing performance, but literally draining myself of energy.

Last week I went through a workout routine specifically designed for power lifting. I wanted to test how strong I was with my old enamel-destroying lifting style. After warming up I was able to bench press 225 pounds nine times, calculating my max at 292 pounds. (Attention all juice heads: I have long arms so please no “pencil neck” comments!)

I decided during this power testing day I would focus strictly on my “glamour muscles.” I was able to perform nine pull-ups before fatigue set in (again, long arms). I then moved on to my shoulders. I performed six reps of 135 while performing a push press. The push press is basically a Military Press with a little leg squat for power. Although I rarely wear a Speedo (anymore), I figured I’d give my legs a little burn as well.

Last week I returned to the weight room to perform the same tests now equipped with my Armour Bite. According to the research, my performance is said to enhance. I noticed a slight improvement on my golf shot but lifting to me is far more important. You see, my goal when I grow old is to be as big as either Hulk Hogan or Paul Sr from American Choppers. How intimidating would I be at 50 years old if I was 7-feet (6-10) tall and 300 pounds? Any young high school punk attempting to date my daughter would be terrified. Add a handlebar mustache and a tank top and that’s just gravy.

During my warm up, I noticed something different. Usually when fatigued, my triceps can’t generate enough power to complete the press. But this time I felt significantly more power at the end of my lift. The numbers in all of my tests increased, some significantly. While testing on 225 pounds again

I powered out 12 reps. That’s a 20-pound increase in my max. When I tested my pull-ups I was able to perform 11 reps. Push press I performed 7.

Although additional research is still being done on the positive effects of the UA Performance Mouthpiece, the privately funded research (my gym membership fees) that I conducted have shown this product to be “performance enhancing” during lifting.

For Test 3, I put the Armour Bite in during a basketball workout. Unfortunately this test was inconclusive because I do not clench my jaw when I run, jump, skip, dance, shoot and dribble… although this photo may beg to differ. During the season I have been wearing a mouthpiece I received several years ago after I had my front tooth knocked out. I use the mouth guard strictly to protect my teeth and not for performance. But this new technology intrigues me. I have endured several concussions during the course of my career. If I had a mouth guard that reduced the impact of concussions, perhaps now when my wife edits my writing, there would be far less typos.

My final test was in the bedroom (cue sexy music). Not like that, you sickos! Get your minds out of the gutter. You see, over the past three years, I have endured a bit of stress. That’s what happens when you work hard, are completely capable, yet continuously get crapped on by the people who control your destiny. I may not show the stress in my daily life since I am such a positive fellow, but at night I have been grinding my teeth. It has gotten so bad that I needed a root canal to fix one of my poor molars. (Maybe I should send that bill to my agent.) So I decided to start wearing the Armour Bite when I slept.

According to Under Armour, the yellow plates bearing the UA logo are made of an impenetrable, unyielding material. That is a good sign considering my teeth would be grinding against these pads for eight hours a night. After wearing the UA Mouthpiece while sleeping, I felt an improvement in the back of my mouth. I have had a lot of pain throughout my back teeth and gums over the past few months. Since wearing the UA Performance Mouthpiece the pain has subsided. Trying to disprove the positive results of this mouth wear, I called several local dentists and priced-out both custom-fitted night guards and mouth pieces. The average prices were similar to the price of both the Armour Bite Mouthguard ($495) and the Armour Bite Mouthpiece ($495).

I tried, during this piece, to keep my integrity as a journalist and not be a corporate suck-up; however, in my business, results are what counts. This mouth piece certainly worked for me. I am not sure how others fared, but I was able to lift more, hit one amazing golf shot, and stop the pain in the back of my mouth, and all of this for a price that is competitive with similar products. Maybe if you do not grind your teeth, lift weights, or play a non-contact sport, this product would be useless. But for me, I definitely felt the benefits, and with only a minor speech impediment.