The D.A.Y. the Bobcats grew up 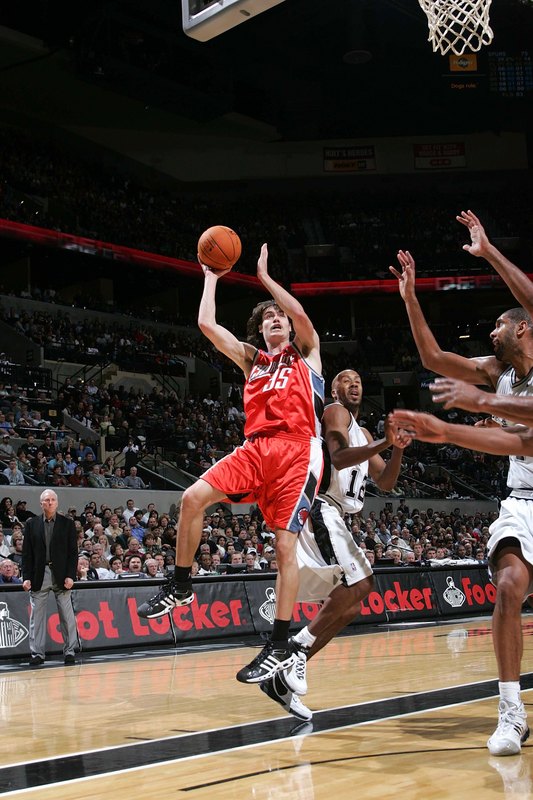 I’m back from the mystery event. Still have my kidneys as far as I can tell. Lots of stuff to get to today including the Dirty 30, an Omar review, hopefully another Player’s Ball NBA diary, and more. Let’s work.

CHARLOTTE 95 SAN ANTONIO 92
The one-win Bobcats started off like you’d think they would against the Spurs in San Antonio, shooting 3 of 15. But that’s if you don’t count Adam Morrison, who had the best game of his young career, hitting 6 of his first 7 shots, on the way to a 27 point night. The Spurs were coming off their 19 point come from behind win over the Rockets, so you have to figure that they were overlooking this game just a little bit. Emeka Okafor had a pretty impressive night himself, going for 19 and 9 with 5 steals and 5 blocks. Duncan and Parker played well enough for the Spurs but Manu struggled with his shot and other than 17 from Finley, the reserves didn’t pick up the slack like they did against Houston. Finley had a chance to win it at the end of regulation, but his missed a three. The Bobcats dominated OT and won this game despite being outboarded by 22.

SACRAMENTO 115 MEMPHIS 111
The Grizzlies went small and tried to outrun the Kings, and they scared them for a minute there, with a 10-0 run in the fourth to take the lead. But… no. Arco. Kevin Martin put the Kings ahead with a three, he hit another one later on to seal the win, and after the game when asked about Ron Artest’s late entrance to the game because of a back that’s been bothering him Kevin said “I thought he just went to the bathroom. You know Ron. You never know what he’s going to do.” Good call. Chucky Atkins led the Grizzlies with 27 on 10 of 11 shooting. Mike Bibby led the Kings with a big 32 and 10 night and Shareef had 21 and 13.

NED FLANDERS 1 BILL SELF 0
Fact: Homer Simpson’s neighbor is a graduate of the school that beat #3 Kansas at Kansas. That is funny.

ORLANDO 108 DENVER 99
Dwight Howard was held to a mortal 9 and 8, and Carmelo went to the free throw line 19 times on his way to his fifth straight 30+ game. Easy win for Denver, right? WRONG. Hedo Turkoglu and Keyon Dooling combined to go 9 of 12 from three point land and Melo got called for travelling and bobbled a pass at crunch time, giving Orlando the opening they needed to take the game from them. Marcus Camby scored 13 with 12 boards, 4 steals, and 2 blocks. Now that Kenyon is out for the year, how much longer can Marcus go without joining him on the injury list? Dooling led the Magic with 25. When you’re hot, you’re HOT.

CLEVELAND 100 PORTLAND 87
The only thing that went wrong for Cleveland was Larry Hughes banging his knee into Martell Webster. They had a little scare there, but X-rays were negative, which is a positive for Cleveland. LeBron spread the ball around int he first half getting everyone involved and took over the game in the second half. Final numbers: 32-7-7 on only 15 shots and hit 3 of 6 threes. It was the perfect understated LeBronimance game. Zach Randolph scored 26, and he went to the free throw line 20 times along the way. So it’s not just the extra hyped and cross promoted superstars that get the calls. I find that comforting.

NEW ORLEANS 100 DETROIT 99
After struggling with his shot against Charlotte, Chris Paul came back strong with a 20 and 13 game with zero turnovers. Rip and Chauncey did what they could, combining for 52 points, but now that the Pistons aren’t as good defensively, those points aren’t as meaningful. Hilton Armstrong hit the game winning free throw, missed the next one that would have made it a two point game, but he got the rebound and tipped it away to run the clock out. He was my pick for rookie “Most likely to fade into obscurity.” Hey, he made the key play to win an NBA game. Disturbing quote from the game comes from Tayshaun Prince: “That kid got a chance to play tonight and he made a statement. That keeps happening to us — young guys come in all fired up and play great against us.” Uh, Tayshaun, you’re not the defending champs. You guys weren’t even in the Finals last year. Other teams are just outworking you.

NEW JERSEY 100 MILWAUKEE 87
RJ sat out with an injury and Vince couldn’t give 100% because of the flu, so Jason Kidd won it by himself. 25-11-8 with 3 steals. He even went 3 of 5 from three. The Bucks played without an injured Charlie V, but still. Other than 25 from Redd and 26 from Mo Williams, Milwaukee had nothing. Jersey put 31 points on them in the first quarter and Kidd controlled the game the whole way. Interesting note: the two leading scorers in the NBA heading into this game were Vince and Redd. No shootout materialized.

NEW YORK 102 WASHINGTON 82
The Knicks played great defense! Unbelievable. Washington shot a terrible 31% from the field and never hit a three. Gilbert was 0 for 7 from downtown. The Knicks usually let three point shooters have target practice. This was most unexpected. Q Rich hit 5 threes and David Lee bumped and banged his way to 10 and 15. Renaldo Balkman had his best game as a pro, and is the fan favorite already. Waiting for the update here. This was a 20 point blowout and it wasn’t even as close as that score makes it seem. The Wizards shot 36 of 40 from the free throw line, which is basically as good as you can ever have. And they still got manhandled by the new New York Knicks.

BOSTON 114 INDIANA 88
The Celtics played their best half of basketball in a long time, outscoring Indy in the second half 67-43. Paul Pierce led the way with 32 and the Celtics got good games from Ryan Gomes and Wally among others. Jermaine O’Neal had a rough shooting night, and the Pacers were run out of the building. Al Harrington put up 23 points in a blowout loss.

PHILADELPHIA 96 SEATTLE 90
When Allen Iverson can’t hit a shot and he misses big free throws, the Sixers lose. When the Sonics have an off-night with their jump shooting, they lose. Both of these things happened, so something had to give. Iguodala and Dalembert played well enough to get Philly the win. Andre had 12, 8, and 9, and played good defense. Dalembert blocked 4 shots. Rashad Lewis had a pretty hollow 25 and 15.