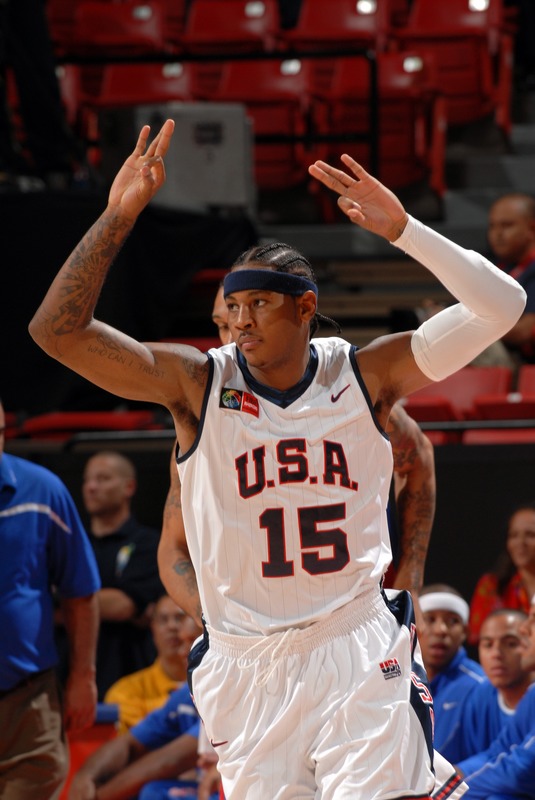 Thanks to the juggernaut that is college football, tonight’s semifinal match between Team USA and Puerto Rico is being presented on ESPN Classic. This, despite the fact that the game promises to be anything but. ESPN Insider and unofficial SLAM fam Chris “The Machine” Sheridan predicts a 42-point USA victory. I think it’s gonna be closer than that—USA by 30. Regardless, you can bet this’ll be a one-time Classic airing.

Anyway, as long as Team USA wins today, they’re in the Olympics. That alone should be enough to keep their attention for at least 30 minutes. Which ought to be plenty. And after career-defining (national team career defining, at least) dunks by LeBron and Carmelo in the last two games, count on Kobe to posterize somebody today. (I realize you’re reading this after the game’s already ended, but trust me, I’m writing it at 6:58 Eastern.)

On with the show.

P.S. A Nelson-like “HA-ha” to all you Michigan fans/alum out there after taking the L to Appalachian State. Nothing personal, but since my alma mater (Delaware) wears the same helmets, I just thought it was funny.

• Quite the dramatic intro for a game that isn’t important enough to be shown on ABC, ESPN, or even ESPN2. Who do you think you’re kidding, people?

• Looks like we get Argentina again in the final. Good deal. It’ll definitely be fun to watch Luis Scola again, especially if he can stay out of foul trouble.

• Has Bill Walton run out of Puerto Rico fun facts? Will he be stuck—wait, I think he just called Carlos Arroyo an “international legend.” Anything worth stating…

• Figure the odds are roughly 5-2 that Ayuso punches Kobe in the face tonight.

• USA teams led by Jason Kidd are 37-0, dating back to the 1972 Olympics in Munich. Pretty impressive.

• No Jon Saunders today. Either he had a college football game to do, or he swore to never work with Bill Walton ever again. Or he’s been in a word-induced coma since the Argentina game.

• Carlos Arroyo fakes Kidd in the air, steps around, and hits the jumper in the lane. Carmelo Anthony answers with a three. Apparently only people of Puerto Rican descent with the initials “CA” are allowed to score today.

• OK, never mind. P.J. Ramos hits, and Kidd responds with his first two-pointer of the tournament.

• Kobe is fouled. Inbounds, back to Kobe, jumper. Wet.

• Kobe misses a three, Dwight Howard loses the rebound out of bounds.

• Ayuso puts PR back on top, and Kidd answers with a three.

• Dwight Howard is pulled for Amare Stoudemire after doing absolutely nothing.

• First time out halfway through the quarter and we’re all tied up. Way to play with a sense of urgency, USA.

• Looks pretty packed for the Thomas & Mack. Maybe it even feels warm in there today, though I doubt it.

• Jason Kidd, another three. He’s got eight points, which is the equivalent of Kobe having like 25 at this point of the game.

• Arroyo with a fantastic spin move that doesn’t result in anything but a putback. 22-17, USA.

• LeBron, layup in traffic. PR can’t get anything, and Stoudemire comes back with a baseline drive and up-and-under. He also stepped completely out of bounds right in front of a ref, but maybe that’s legal under FIBA rules.

• Arroyo, fouled by Amare on the drive. That’s two fouls on STAT.

• Ryan is probably happy about Penn State eking out the 59-point win over Florida International.

• Sloppy, turnover-laden start to the second quarter. Until Kobe hits a three. Lead is back to nine.

• Kobe gets faked into the air by Ayuso, crashes into him (giving three free throws) and Walton calls it “a great defensive play.” I guess he thought it wasn’t a foul. I’d ask what he was smoking, but I really don’t want to know.

• Arroyo’s dribble-drive is beautiful, his finger-roll flip sublime—until it hits halfway up the backboard.

• Carmelo with an emphatic swat that ends with him stepping on the shooter, Nick Apodaca. That would be a foul.

• Kobe drives, all of Puerto Rico collapses on him, he shoots it anyway. Foul. (Ballhog.)

• LeBron drive, to Dwight Howard for the hammer.

• Amare is fouled by P.J. Ramos, the Human Bobblehead.

• PR score, LeBron turnover, PR again. And the USA lead is cut back to eight.

• The USA interior defense is just plain awful. I don’t know if they need to bring in Pete Newell as an assistant coach or what, but it’s really embarrassing. Guys ANY SIZE can score in the lane against us.

• The USA is getting called for a ton of fouls. Off the ball, on the ball; in the paint, on the perimeter. Sheesh. This time it’s Michael Redd.

• Bill Walton, Dengue fever interlude. Shocking that he doesn’t flip it into a Luol Deng reference.

• Puerto Rico has gone chilly. Carmelo commits his third foul on the other end, though.

• Chauncey Billups with a ridiculous turnover at the end of the half. They het the ball back, but can’t convert. 57-42, USA at the half.

• Carmelo opens things up with a three. Walton is saying something about “Rudy Tomjanovich and the special Olympic team in Sydney in 2000.” While I know what he means, it’s still kind of funny.

• Ramos hook, another USA 3, and a LeBron shake and bake layup as P.J. just stands there looking confused. Bill Walton then assures us that LeBron will be in the Hall of Fame someday. Not if the current voters have anything to do with it, unless he becomes a coach in Lithuania or something. USA by 21.

• Transition threes will not save Puerto Rico now—but they sure look fun!

• Ayuso sure hits one in the half-court, though. Carmelo answers with his sixth of the game. Sheesh.

• Ayuso for three AGAIN, and Carmelo answers AGAIN—this time with an oop off Bron’s alley. Calling PR’s interior defense porous would be an insult to porosity.

• Kobe with a typical up-and-under, get fouled, hover, release-right-before-landing-on-the-floor shot. And 1. USA by 25.

• LeBron James takes advantage of a 1-on-3 break for an easy layup and the ensuing free throw. USA by 26.

• Ayuso dribbles off his leg and out of bounds.

• Bill Walton refers to LeBron having been 24 years old during the Cavs series against the Pistons. Actually, he doesn’t turn 24 until December 30th…of 2008. Close, though. Either that or Bill actually IS in a time warp. Stranger things have happened.

• Bron dunks (after an attempted pass to Stoudemire bounces right back to him off a PR player), Arroyo three’s.

• Ayuso kisses a three off the front of the rim, barely avoiding the airball. He gets the chant anyway.

• Ayuso is fouled, and slow getting up. His tattoos are a multicultural odyssey.

• Arroyo with a three of his own.

• And Redd with another.

• Arroyo hits half a pair to make it an even 30-point deficit going into the fourth quarter. Don’t call it a comeback.

• Michael Redd for three. Again. From the right corner. Again.

• Safe to say that Kobe, LeBron and Carmelo are done for the night.

• Deron Williams is in, Tyson Chandler is still on the bench.

• Redd, behind the back pass on the break to Amare for the dunk.

• Apodaca with a three at the buzzer. Nice to see that PR is still playing. Kinda.

• After this game I’ll have to write “I WILL NOT DOUBT CHRIS SHERIDAN ON THE SPREAD AGAIN” on the blackboard 500 times. As soon as I buy a blackboard.

• Tyson Chandler’s in there for those crunch-time minutes.

• Calling this garbage time would be an insult to garbage.

• The crowd is chanting for Carmelo Anthony. They probably won’t get him.

• PR can’t buy a field goal. Well, they could try, but Tim Donaghy doesn’t appear to be working tonight.

• Chandler with his patented reverse oop.

• PR comes back with one of their own for the final spread—135-91. Enjoy Beijing, USA. And I’ll see y’all tomorrow for the meaningless Argentina match. Maybe.