The Gangsta and Un-Gangsta Moments of 2006 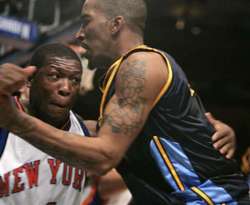 By Omar Mazariego
As Michael Jordan once said, “I’m back.”

The Gangsta Moments of 2006

5. Lance Bass is Gay – Now the only reason I say this was gangsta is because it justified what I’ve been saying ever since N’Sync blew. I remember telling all the little teenie boppers in my school, “N’Sync is more fruity than that product that Tucan Sam be hockin’!” And they response was always, “You’re just hater, Omar! Just go back to Brooklyn and commit a crime. You know that’s what you do best!” Well ladies, I hate to say it, but I told you so. That’s one down and four to go. And trust you me, JT will be theee most reluctant to step out from behind the shirts and jackets on the hangers.

4. The Democrats Make a Comeback! – Yes, ya favorite gangsta critic gets his political on. I find it gangsta that the actions of just one man (George Bush) made Republicans vote Democrat in this years House elections. I don’t claim no set when it comes to political parties, but I will say that I don’t roll with people who don’t have cojones and who are so stupid they study for blood tests and buy glass doors with peep holes, you know what I’m saying? How many businesses did this man run into the ground? Like 2 or 3. And he’s our president?  ’08 I’m voting for either Hillary or Obama. Straight up and down. I was in the hood for the Guliani era, and trust you me, vote him in and it’ll be the Patriot Act times six hundred and sixty six.

3. The Wire Returns – In the hood The Wire is what I Love Lucy was to the ‘burbs! Plain and simple. Arguably the best season of the show and probably the best hour of television on Sunday nights, The Wire had the hood on smash from east to west. Marlo and Chris are badass and is Snoop becoming a sort of sex symbol for the Rosie O’Donnell fan club? All signs point to “Yes!”

2. NBA Players Get their Balls Back – After being stripped of their balls (so to speak), NBA players finally spoke up against the Stern regime and got their cojones back (again, so to speak). After spending 3 months playing with a genetically created basketball that was stem cell researched cloned, David Stern caved into the NBA players request for the return of the all-natural leather ball. A basketball made from a once living and breathing creature. Is there any other way to play the game?

1. The Brawl at Madison Square Garden – I will admit that the very ignant side of me appreciates this “black eye” on the NBA. But come on, it was more gangsta than the Jehri Curl was in Compton back in the 90’s. “Everyone Hates” Nate Robinson was keeping it thorough like the Brooklyn borough on that hard wood floor. That is until he got “clipped.” Whoever hit him with that clipboard is a M’fing surgeon with the clipboards. By no means was this as entertaining as the Auburn “Hamburger” Hills brawl, but I takes whatever entertainment I can get.

5. Tom Cruise Does the Young Joc Dance – Watching Tom Cruise reaching out to Negros and Latinos and trying to gain minority fans now that he’s alienated his white fan base with his Scientology rants was about as sad as Barry Bonds dry snitchin’ on his teammate about the drugs he took. Tom is like a one man Jehova’s Witness for Scientology, ain’t he? Trying to recruit all of Hollywood? And how you gonna go on BET and do the Young Joc, and then turn around and not invite Oprah to your wedding?

4. Bush Sends 20,000 More Troops to Iraq – I know that happened this month, but it still sucks ass. Sending 20,000 more troops into Iraq is like sending 20,000 kids to Michael Jackson’s house in hopes that they’ll slow down the pouring of his “Jesus Juice” and finally bring peace to the Never Ever Land Ranch. G-Dub is like Darth Sideous in Star Wars or Buffalo Bill from The Silence of The Lambs. “It ruuubs the lotion on its skiiin or else it gets the hose again.”

3. Carmelo’s Sucka Punch – What a punk move. Melo’s supposed to be reppin’ B-More but the B he reppin’ must stand for Beyatch! Plus that punch was mad weak. That s–t was more outdated than all those ya mama jokes on that whack ass “Yo Momma!” show. God I hate that show. But really, Melo, how you gonna run from a fight? And from a midget fight at that. How proud do you think La La is right now that her man’s a punk? I thought she was Sucker Free on weekends?

2. Britney Spears… Shaved! – Man, I’ve been waiting for this moment since Britney first stepped on the scene with her pigtails and school girl skirt. But you know what they say: be careful what you wish for, you just might get it. And from the look of the pics, it seemed as if everybody got it. LOL. Her ish looked like the “I” on the Crooked I beer. I was like “Ew!” I mean she divorces her corny ass wannabe rapper husband and paints the town red with the whore of Babylon herself, Paris The Prayin’ Mantis Hillton. Running’ around with no underwear while her kids are being babysat by an anonymous person. Really though, Britney became the epitome of the term “Trailer Park Trash.” Forget Anna Nicole Smith. She’s muthaf–kin’ Ivanna Trump compared to this train wreck of a woman.