The Life and Death of a true GlobeTrotter 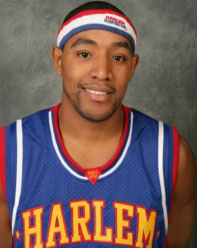 The death of Chris Sandy was a tragic loss of a person and basketball player who, at age 27, had a career that was looking as promising as ever. On Thanksgiving Day, the former Fresno State point guard lost his life in a car accident in Finland. While Chris never made it to the NBA, his playing career was both decorated and rich in experience.
“I got a call at about 11:30 that night and the first thing I said when I heard about it was ‘No, No!’” said Kenny Charles who coached Chris in the USBL with the Brooklyn Kings. “Unfortunately a lot of people who read this won’t know him, but just make sure you get across that this was just absolutely a great kid.”

Chris grew up with his mother and two sisters in the Boulevard Housing Projects in East New York, Brooklyn. He was constantly in the park playing pick-up games, getting over on his opponents with a raw natural ability that wouldn’t be tamed until he began his professional career. He joined Kim’s All Star’s as a kid and played for Kim Walden, a woman who had gotten off drugs and dedicated her life to coaching and teaching young children. When the time came, Chris attended New Utrecht High School but didn’t play basketball.

“He was messing up and I asked him, ‘why don’t I ever see your name in the paper?’” remembers Chris’s childhood friend and teammate Jeffery “Urkell” Rumph, who earned his nickname because of his resemblance to the “ultra nerdy” character from Family Matters. “I told him that he should go to school, to stop playing around and get serious about it. I saw everybody he was playing against in the park get their name in the paper, like Erick Barkley, Omar Cook, even Ron Artest and Reggie Jessie. He was going at them in the park and getting his name up.”

With the help of some coaches, Chris transferred to Newtown High School in Elmhurst, Queens. In his only full season of high school basketball Chris helped the Pioneers to a 26-1 record, going all the way to the city championship where they would lose to Robeson of Brooklyn. After being named All City Chris signed with Westark Community College in Fort Smith, Ark. and was a second-team JuCo All-American in 2000-2001.
Chris signed with Fresno State and its successful and controversial head coach Jerry Tarkanian. However, his time at Fresno would be cut short. Amongst debating with the NCAA on various eligibility disputes, Chris played just 16 games for the Shark, all during the ’01-02 season. He averaged 9.9 points and 5.8 assists and scored 19 points in an upset over Louisiana Tech in the WAC tournament. He was denied the chance to play as a fifth-year senior so ’02 marked the end of Chris’ college playing career, however, he remained at Fresno State and earned a degree in social studies.

“He never really cared or worried about what people thought about him or what happened at Fresno,” Rumph says. “Anybody that knew Chris, knew that he touched their life. If you didn’t like Chris Sandy something was wrong with you.”

After finishing school, Chris kept his life rolling in a positive direction. He signed with agent Joe Charles and began gearing up for a pro career. He came back to New York and began showing up at places like the Kingdome, Hunter College, and Rucker and suited up for professional exhibition teams like Big Apple Basketball in 2003.

Not long after that, Chris signed to play with the Harlem Globetrotters and toured the world. Wanting to maximize his exposure and bring his game to the next level, Chris played for both the ’Trotters teams—entertainment and competitive. Chris spent two years with the Globetrotters and kept running in major pick-up and pro-am games whenever he was home in New York City.

Going into the 2005-2006 campaign Chris wanted to transition into pro ball, starting with the American minor leagues. Even though he was getting up there in basketball years, at 26 Chris felt he still had a chance to make it into the NBA. “Last year we mapped out a strategy for him to play in either the CBA, ABA or USBL,” says Charles. “And anyone who watched him could see that he played great and was one of the top guards wherever he played last year.”

He started with the ABA’s Strong Island Sound, owned by a friend of Charles’, Darren Cioffi. Cioffi took an immediate liking to the ever-charismatic Chris who quickly became a dominant player for the Sound and an asset to the organization. “He always said ‘We’ when we was talking about our team, even after he left us,” Cioffi says. “He was the glue that held our team together.”

With help from familiar New York faces Mike Campbell, Charles Jones and Corey Underwood, Chris guided the Strong Island Sound to the Final 4 of last season’s ABA playoffs. In 12 games with the Sound, Chris averaged 20 points, 3 assists and 3 rebounds per game. He shot 49 percent from the field and 44.2 percent from behind the 3-point line, being named honorable mention All-ABA. Once again, Chris had left a good impression. “At last year’s ABA playoff games, I arrived at The Blue Cross Center in Rochester about an hour before one of the games. The arena was empty except for one person doing laps, dribbling a basketball around while he ran,” remembers Joe Newman, the CEO of the ABA. “It was Chris Sandy of the Strong Island Sound. I just sat in the stands about five rows up and watched. He stopped and said, ‘Hi, Mr. Newman, what brings you here so early?’ I said, ‘I just like to get to the games early and watch the set up, players, like you, preparing and other pre-game stuff.’ I asked him ‘How did you know who I was?’ He said, ‘I follow the ABA web site and saw your picture on it.’ My impression of Chris Sandy was that he was not only an excellent basketball person, but also a very bright young man. He came into the stands and we talked about his career, his love of business and interest in marketing—and what he wanted to do when his playing career was over. I have attended many ABA games; Chris was one of the few players that I have conversed with about things other than the game.”

At the completion of the ABA season, Chris signed to play in the USBL and ended up back home, playing for the Brooklyn Kings. He was third in the USBL in assists (4.8/game) and seventh in scoring (18/game). The 2006 Brooklyn Kings were the New York Yankees of the USBL. The USBL was suffering through a rough season that occasionally saw visiting teams not show up to the Kings’ downtown Brooklyn arena for scheduled games; when that happened Chris could always be found roaming the stands signing autographs or on the court doing tricks for the handful of fans who had shown up expecting a game.

The Kings ended a turbulent season in the USBL with the eastern division title but a tough loss to the Kansas Cagerz in the first round of the playoffs in Dodge City, KS. While some players chose to go out and party after the loss, Chris chose to return to his room and play video games. “He was mad, man. We were holding our heads,” remembers Tommie Eddie, who was Chris roommate last season with the Kings. “But, after that, we were laughing and joking about being out there. All of this has just taught me not to taking anything for granted, you could be playing today and gone tomorrow.”

In August, having received some interest from the Utah Jazz but nothing firm, Chris left for Finland where he signed with Kouvat Kouvola. Although he was apprehensive about leaving the country, his friends and agent said that Chris knew that going overseas could bring him one step closer to the NBA. “The big plan for after Finland was to get Chris a shot with an NBA team for training camp,” says Charles, who Chris called the night before he passed to tell him about a 34-point, 7-rebound, 7-assist game he’d had the previous evening. “He was just a great kid that I thought really deserved an NBA look.”

Chris was not fond of driving in Finland, but his girlfriend had decided to visit him for Thanksgiving. On the ride to the airport, police say, Chris lost control of his vehicle and collided with another car going in the opposite direction from him. At the time of his loss, Chris was averaging 18 points per game and 3.9 assists. While Chris never lived his dream of playing in the NBA, there is no shortage of good things to say about him. “The season had ended and it was Father’s Day,” remembers Cioffi. “I got a message on my cell phone from Chris, calling to wish me a happy father’s day. That’s just the kind of kid he was.”

For those Slamonline readers in New York, services for Chris will be held this Wednesday, December 6 from 4-8 PM at Franklin Bell Funeral Home, 536 Sterling Place in Brooklyn.