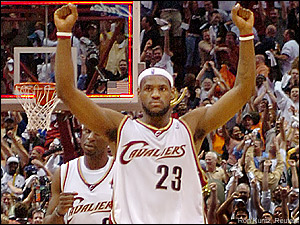 “This guy is a bulldozer with a wrecking ball attached.”

– And the iron goes to: LeBron James.

4/21: Finally King James gets to bask—can one bask in mid-air?—in the playoff limelight. You’ll be hearing from me on this subject once the postseason gets going.

7/23: What you heard from me in the postseason on everything LeBron:

Game 1 Cavs-Wiz: “You saw the flashes of Magic. You saw the flashes of Michael. As much as it would be interesting and time-consuming for talking heads to anoint him Jagic Mordan, a space age robot of near basketball perfection sent to the NBA from the planet Ak-ron, we should probably just chill and recognize that LeBron James is simply the new blend of unstoppable, highlighted by whizzing no-look passes and an uncanny finishing ability, and leave it at that.”

Game 3 Cavs-Pistons: “With all possible hope hanging in the balance, LeBron knew that the table had been set for him react dominantly. He knew he had to get to the rim and begin to assert his will on the game. He did. Easily.”

Game 6 of Cavs Pistons: “Call me a sucker, but a full metamorphosis had taken place and it challenged my very belief system. This transformation was powered by the electricity inside the Q running through my veins and by LeBron’s ability to consistently get to the rim.”

Despite not re-upping for max years, people need to focus more on how LeBron wants to bring rings to Cleveland. If he leaves without bringing any chips to title-deprived Cleveland, he knows he’ll go down as the biggest traitor in the history of sports. Babe Ruth was born in Baltimore and was sold from Boston. LeBron James was born in Akron and would have to bolt Cleveland. Not happening…My contention has always been that, while he is a financial empire, LeBron James is also a human being. Financial empires leave for the bigger cities. Human beings stay close to home because they know that’s where the true love is. (Shameless plug: For more of my thoughts on LeBron’s financial empire, pick up KICKS 9 in August.)

“You ain’t hungry. Matter of fact I don’t want you in my gym. Get out of my ring, you disgust me.”

– And the iron goes to: KG and the rest of the T-Wolves.

4/21: KG is feeling bluer than the blood in that giant pulsating vein that dominates his forehead. This has dragged on long enough. He deserves a new chance. Kevin McHale should trade him for half of the Chicago Bulls.

7/23: RealGM.com won’t seem to let me trade KG to the Bulls. It appears that the Ben Wallace and P.J. Brown signings have made KG to Chicago deals pretty much impossible. But I’m no salary cap expert, so maybe there’s a way–probably a third team. Any ideas? Later this summer we’ll touch on the potential rap battle between Mike James and Troy Hudson. Now, this won’t be just any battle rap. It will be for crunch time minutes. Oh, and Eddie Griffin will be, um, “greasing up” the mic.