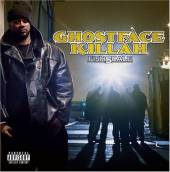 There are only two things that get me amped right now: the upcoming playoffs and Ghostface’s new album, Fishscale. It only seemed natural to combine the two. For those stuck under large rocks — no, not those rocks — Ghost’s latest gem is fire, hotter than magma from the earth’s core. With his latest release, Tony Starks/Ironman/Ghostface/Pretty Toney gives hip-hop some much needed mouth-to-mic resuscitation. One might wonder: how can you possibly combine a rap album and the NBA? Simple. Just cut and paste symbolic lyrics and appropriate various themes from the 05-06 season to add the desired effect.

This exercise is especially fun with a rapper like Ghostface because, often, he makes absolutely no sense; rhyme but no reason, which is actually what makes him so incredible. He’s like the Ron Artest of lyrics.

(Pretend for a second that Ron Ron doesn’t rap and equate his game with Ghost behind a mic). So, making sense out of nonsense becomes the job, until you end up making no sense either…and this is the point when you realize you just wanted to write a bunch of random stuff about the NBA through the most interesting muse possible.

I had my doubts about writing this. But upon mentioning it to a buddy, he responded, “A kilo is one thousand pounds, or three Ollie Millers.” That settled it. A few songs on the album didn’t really have applicable lyrics because they are thematically driven away from words that could be compared to the NBA, or I simply couldn’t find the comparisons.

UPDATE (July 17th, 2006):
Here we are nearly three months later. As you can probably tell, this column was set to run back in April, but we held off on it because we wanted to plug it into the new site. And it’ll be even better this way because I’ll be able to look back on what I wrote and see what went right and what went wrong. I’ll also be able to see what I neglected to include. What I originally wrote is in normal font and the update is in italics. If there was no need for an update, I added nothing.

I listed the songs in the order they appear on the album. Like any good awards ceremony, a single viewing would take about three hours, so this is broken up into parts.

Linkstigators and Gentlemen: Now I must preside over the Pretty Tonys. I hope you enjoy this as much as I enjoyed putting it together
(listening),
Jake Appleman

P.S. If you don’t like hip hop, or Ghostface for that matter, I still think this will be a worthwhile read because it deals exclusively with our favorite league.