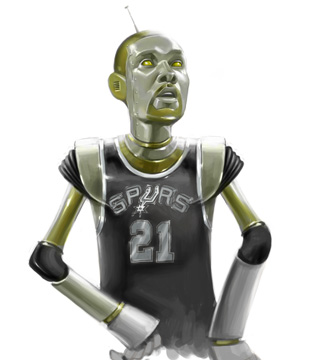 How I picked it in the magazine:
1) Dallas Mavericks
2) San Antonio Spurs
3) New Orleans/Oklahoma City Hornets
4) Houston Rockets
5) Memphis Grizzlies
Why I picked them that way:
The Mavs were really good last season in so many ways — don’t forget they won 60 games last year while playing in one of the toughest divisions in the League — but all anyone remembers is their collapse in the NBA Finals. And that’s really what it was, a complete

and total collapse. No way that happens again, unless the refs start giving a player on the other team all the calls. (And that would never happen, right?) I think Dallas is going to win the West, but I’m not going to print my NBA champs pick until next week.

You guys know I have great respect for Gregg Popovich and Spurs GM RC Buford, who are each among the best in the world at what they do. But I still don’t get the Jackie Butler/Francisco Elson signings. Are those really the best centers the Spurs could find? What the Spurs do have going for them is that the Tim Duncan Robot, Manu Ginobili and Tony Parker are all healthy and raring to go. (And isn’t it dope that we finally got a picture of the Tim Duncan Robot?)

I think the Hornets may have had the best offseason in the NBA. Peja Stojakovic wasn’t much in Indy, but he’s going to get wide-open looks for N’awlins, with Chris Paul setting him up over and over. I’ve always thought Tyson Chandler was underrated, and drafting Ced Simmons and Hilton Armstrong gives them unprecedented interior depth. I also really like David West. An official Wild Card Squad this season.

Over the last few weeks, I’ve felt better and better about the Rockets, who seem to coming together, and I thought the signing of Bonzi Wells was going to at least give them another offensive option. But now Yao’s hurt, Bonzi skipped out of training camp, and I still want to see T-Mac have a healthy season before I bank on him.

Kyle Lowry and Rudy Gay have looked great in the preseason. The only problem is that there’s no Pau Gasol, at least not for a while. And without Pau, the Grizzlies will struggle.