The tell-tale t-shirt of a NERD 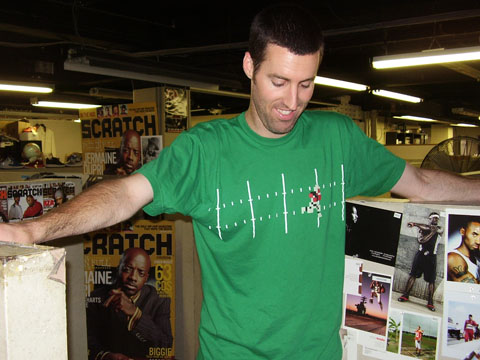 If I’ve ever said it’s slow around here in the past, clearly I was not looking forward to September 10, 2007. Today I plan to use my time at the office to work on something that will accompany someone else’s post later in the week, which should take some time. Other than that, it’s hard to even think of basketball topics to think about, let alone write about. But don’t worry, I’ve got you covered on the entertainment side. I am going to mock and insult a co-worker in humorous fashion! And face it, that’s what you care about deep down inside, at least those of you who are ‘core enough to check a basketball website daily throughout the summertime.

Yesterday was the first NFL football Sunday of the ’07 season. I can’t really commit to watching football when its 85 degrees outside. In and out of the house all day, I did see the sweet highlights of the Eagles muffing two punts. Rumor has it that Khalid, he of the 13-3 pre-season prediction for the Eagles, is out of the office today. I will admit the thought occurred to me to send him a text message yesterday which would read “12-4?” but I held back. Some friends came over to watch the Giants-Cowboys game and I told them nothing that could possibly happen in the game could dampen our collective joy over the Eagles loss. That may have been a mistake.

The only Giant I respect, Brandon Jacobs, left the game with a knee injury and people are looking for his replacement already. Eli Manning, the face that launched a thousand of funny insults, played one of the best games of his career but ended up getting injured and sitting out the end. The defense was, if you need an NBA equivalent, kind of like the Memphis Grizzlies under Tony Barone last season but even less physical. Michael Strahan returned with a beard and seemingly weighing about 150 pounds. No disrespect to myself, but when an NFL team’s star defensive tackle is trying to look like me, that team is in trouble. Osi Umenyiora who is supposed to be the next big star pass rusher in the game, got hurt once again. The ex-running back who wrote a book was on national TV marketing himself like he just didn’t spend the past week insulting the intelligence of the only fanbase he ever had. On Friday, I wrote a little bit about HGH and how you can get into trouble for taking it, but I think I might load up on some and get real big so I can fight Tiki Barber to the death. His death. What, you think these hands have been soaking in ivory all these years?

But enough of my kindness and sunshine. It’s time for the main event. Inspired by bitterness? Sure.

Now you may be familiar with Ryan Jones. He comments a lot on this site, and he’s even been known to write a post from time to time, usually having to do with, I’m not sure what the PC term is for this, but white trash no offense. Ryan often takes a stand about how playing video games is not “cool” or he will call those of us who grew up playing video games “nerds.”

And then Ryan shows up at the office on Friday wearing this shirt:

That my friends, is Bo Jackson in Tecmo Bowl or possibly Tecmo Superbowl. Reduced to an attention grabbing image on a t-shirt. And what is the purpose of a t-shirt like that? To give off the appearance of cool. So Ryan Jones, the most outspoken critic of the nerdiness of the video game players of this world, is now seen wearing the t-shirt of the most iconic sports video game of all-time? This is the biggest scandal since Larry Craig’s bathroom adventures.

You may also notice that I have framed Ryan in the photo alongside images of Mike Vick and Kobe Bryant. That’s a little something called divine inspiration of the artist. I studied film briefly in college, and I believe this is what you might call Mise en scene. Is it nerdy of me to know that? Is it nerdy if I say that I can’t wait for the return of Heroes on September 24th? What if I were to say that the greatest video game of all-time is in fact Sid Meier’s Civilization IV? Well, take notes on all of that nerdiness Jones, and who knows, maybe you can find a t-shirt with pictures of them in ten years.

I’m sure Ryan’s retaliation will be swift and snarky. He is actually writing the most important post of the week this week, so I could not have picked a worse time to do this. I thought about apologizing for straying so far from basketball, but you know what it is summertime and this is entertainment too.

AHAHAHAHAHAHAH! Good luck topping that everyone else writing posts for slamonline this week!