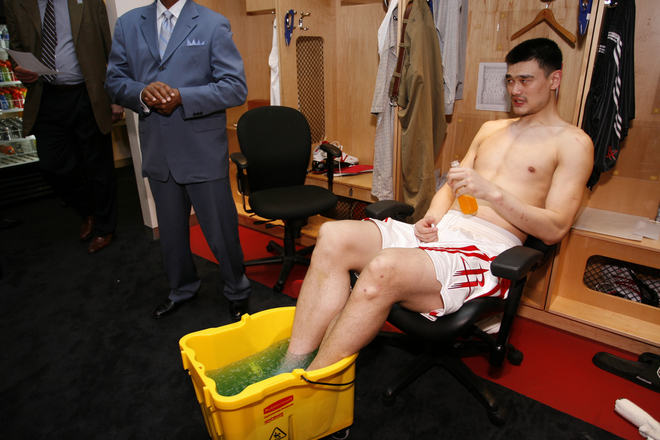 Last night, Yao Ming led the Houston Rockets past the Portland Trailblazers. It was the first Playoff series victory for Houston in 12 years, and afterward, all Yao could do was let out a giant sigh of relief.

For the first time in his NBA career, Yao Ming tasted Playoff success. The Houston Chronicle attempted to capture his feelings:

Yao Ming let out that long, gust-of-wind sigh he does when a question strikes him as worth a few extra moments of consideration to ponder an answer. This one, however, had something extra on it, producing enough breeze to fly a kite. His sigh of relief was so pronounced, Ron Artest leaned into the microphone in front of him to mimic it. Yao was entitled. Yao wanted this so badly. He ached for it. Others might deny their desires. Few would risk revealing the pain. Yao left no doubt. When he tried to sleep, he couldn’t. When he did sleep, he dreamed of game plans and techniques.

Yao was part of the last stretch of first-round disappointments, and very much the face and foundation of the franchise. So when the playoff losing streak was finally over, Yao felt a sense of relief he could not describe. “Yao, it means a lot,” Adelman said. “He’s been through things the team has had. He’s been through two seven-game series. You just have to keep persevering.”

Being one of the most likeable athletes on the planet, it’s nearly impossible not to feel happy for Yao this morning (unless, of course, you’re a Blazers fan.)