Thoughts on the schedule 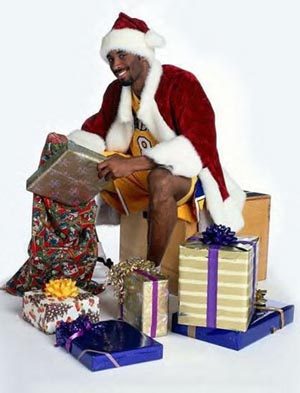 So the NBA schedule has been announced. J.E. Skeets at The Basketball Jones takes a look at some of the most anticipated games on the schedule and Marc Stein, the man with the round yet pointy face copies his idea. I like the title “Champs Ring in the Season with Big Ben” because it works for the NFL opener too. Pittsburgh-Miami on September 7th. Is there some type of Big Ben vs. team from Miami synergy going on here?

Much has been made about the decision to put the Lakers on national TV as often as possible, and on X-Mas day once again. I have no problem with that. People love to watch Kobe play, people love to see celebs in the crowd, and it’s good to have traditions. I wish I was watchng the 81 point game as it happened. If you remember the old slamonline, I wrote The Links the day after the 81 point game and I begged people to email what they were doing and what they thought at the time, like it was the moon landing or something. Also, the playoff game against Phoenix when he hit the buzzer beater was probably the game of the year in the NBA. The Lakers are still great television. Salty Popovich whining about the Spurs and Pistons being played as an undercard on Christmas Day, is not. Funny how in hindsight Miami got further than Detroit or San Antonio. All the jokes I made last year about how the NBA only cared about entertainment, and not putting good basketball on display… ignore those. You win this round Sternbot.

But what I do have a problem with is that they’re also going to the Heat-Lakers well for the Dr. Martin Luther King Jr. Day game again too.

Look, Kobe and Shaq behaved as mature adults and took the opportunity provided them on that day to patch things up publicly. Is this going to be an every year kind of deal from now on? Is the Kobe-Shaq kiss and make-up session becoming a new national holiday? If so, put it on any other day than a Federal Holiday, so people can get out of work that day too. By the way, that was the same game where Shaq and Andrew Bynum “became friends.”

As Stein points out in his preview – and though I made fun of the shape of his skull and jokingly said he stole his idea from J.E. Skeets, I have to admit it’s thorough – LeBron and Wade don’t go head to head until February 1st. And of course, the February 25th Pistons at Bulls game when Big Ben (Wallace) makes his return to Detroit should be great.

Other than that, I’m looking forward to watching every minute of every Knicks game, putting as much money into James Dolan’s pockets as I possibly can. The previous sentence was a lie.