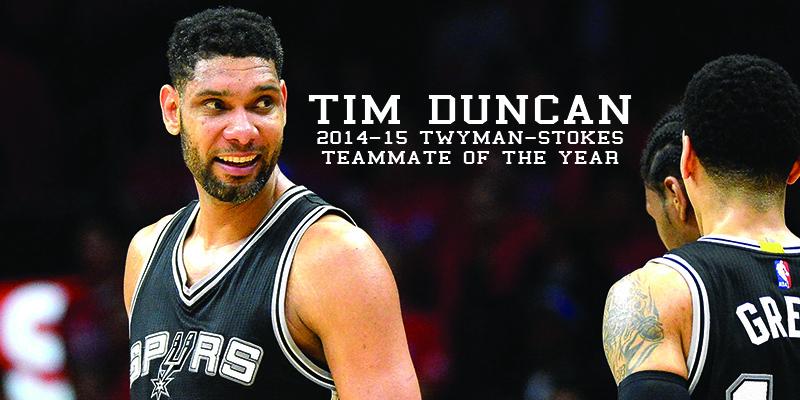 He may not be the League’s most exciting player, but guys love playing alongside Tim Duncan and his peers recognize the positive impact the big fella has on his teams—“The Big Fundemental” has won the 2014-15 Twyman-Stokes Teammate of the Year award.

NBA players select @Spurs’ Tim Duncan as recipient of the 2014-15 Twyman-Stokes Teammate of the Year! pic.twitter.com/GTNyyp6PKN

Duncan, 39, re-upped with the San Antonio Spurs on a two-year deal this summer.

The future Hall of Famer is coming off averages of 13.9 points and 9.1 rebounds, and was named an All-Star in his 18th NBA season.

NBA players have selected the San Antonio Spurs’ Tim Duncan as the recipient of the 2014-15 Twyman-Stokes Teammate of the Year Award. The award recognizes the player deemed the best teammate based on selfless play, on- and off-court leadership as a mentor and role model to other NBA players, and commitment and dedication to team.

A panel of NBA Legends nominated six players from each conference for the award and then nearly 300 NBA players submitted their votes through confidential balloting conducted by the league office. […] Duncan has helped the Spurs reach the playoffs in each of his 18 NBA seasons and win five championships. Last season, Duncan was selected to his 15th All-Star Game, 15th All-NBA Team and 15th NBA All-Defensive Team.

Jack Twyman and Maurice Stokes, whose storied friendship transcended their Hall of Fame accomplishments, are honored with an annual NBA award in their names that recognizes the ideal teammate. Twyman and Stokes were teammates on the Rochester/Cincinnati Royals from 1955 to 1958. In the last game of the 1957-58 regular season, Stokes suffered an injury that led to his falling into a coma days later, leaving him permanently paralyzed. Diagnosed with post-traumatic encephalopathy, a brain injury that damaged his motor-control center, Stokes was supported for the rest of his life by Twyman, who became his legal guardian and advocate. […] As part of its support for the Twyman-Stokes Teammate of the Year Award, the NBA will make a $25,000 donation split among the following five charities selected by Duncan: My Brother’s Workshop, American Cancer Society, Ten Thousand Helpers, St. Croix Interscholastic Athletic Association and St. Croix Foundation.