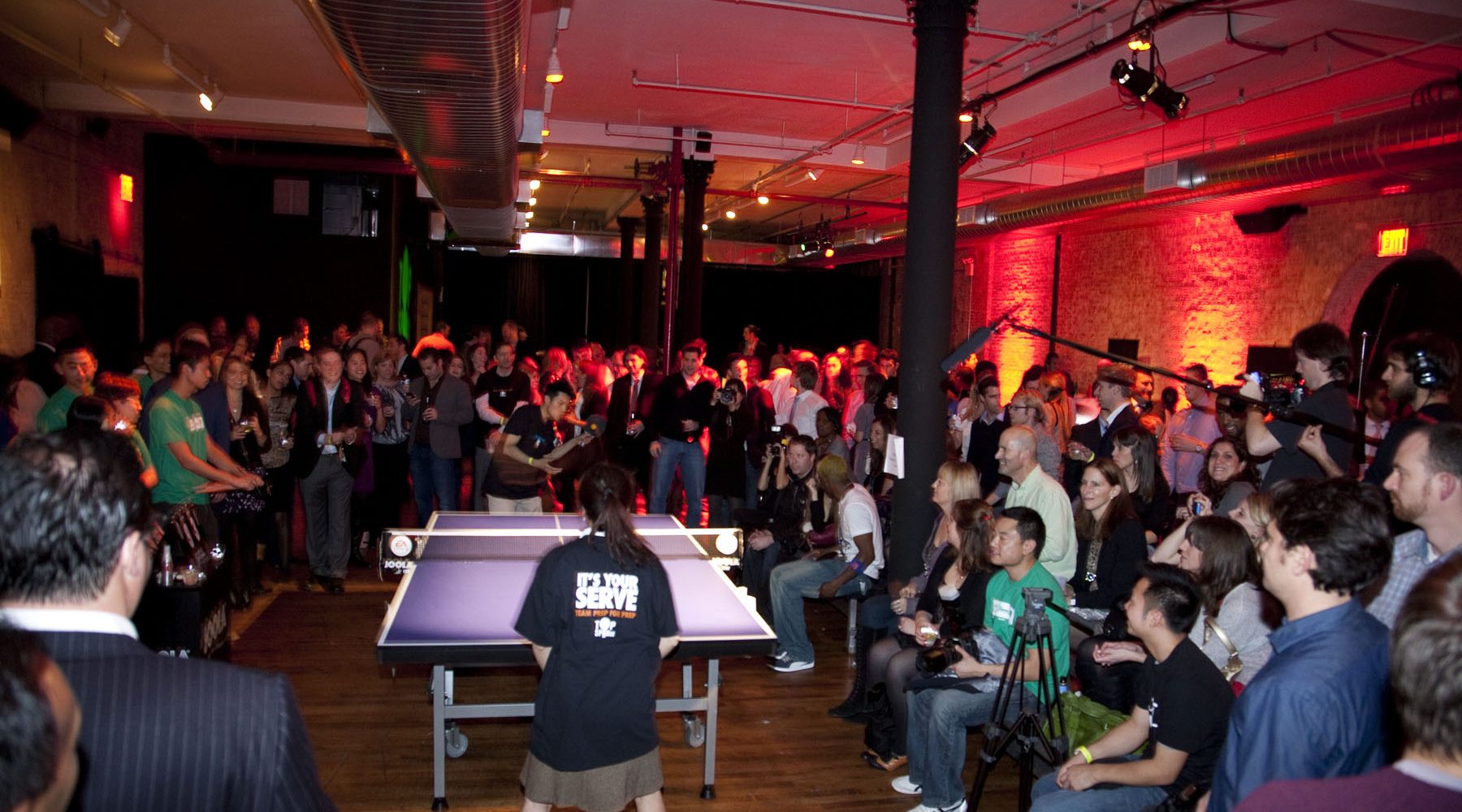 Every year, TopSpin, a national philanthropic group dedicated to empowering America’s youth through education, holds a Ping-Pong Showdown produced pro-bono by MKTG INC. Stars from the entertainment and sports world come together to showcase their table tennis skills at the annual block party event held in New York City.

NBA stars and legends like Chris Paul, Bernard King, Dirk Nowitzki, Darryl Dawkins, Kenny Anderson, Kenny Smith, Jerry Stackhouse and Allan Houston all paddle up to raise money for the education crisis in NYC and do what they do best: compete. The best thing about it is, it’s open to the public, which means YOU can ping-pong and party with NBA stars, for one night only. In a recent interview with TopSpin Founder and Foxrock CEO Peter Farnsworth, I was able to get the full grasp on how a small non-profit has now blossomed into one of the premier charity events in the country.

Farnsworth worked with the NBA for 10 years as Senior VP of Global Business Development, and during his time there he came up with the idea to start up TopSpin. “It actually started as just a fun thought between myself and some friends while I was at the NBA,” Farnsworth said. “You know, trash talk about who the best ping-pong player was in the room. Of course everyone said they could beat each other, so I thought why not make a little event out of it? We got some friends to come out play, as well as help fund a great cause. I think the grand total at the event was about 350 people, and here we are five years later and over $1 million raised for 14 educational nonprofits.”

Farnsworth and friends have definitely turned a once-simple thought into a once-in-a-lifetime experience. Professional sports leagues and major companies such as the NBA, NFL, NHL, NASCAR, MLS, IMG, American Express, Turner Sports and Coke all have pitched in on behalf of TopSpin to raise money and awareness on the education crisis. Farnsworth said, “It’s a great example of coming together in a meaningful way for charity. It’s really a labor of love. It’s just a pure philanthropic effort, and not to mention it’s great seeing these star athletes walk in talking trash, thinking they’re great, thinking they’re playing their cousin in the basement like back in the day, and then after a few losses, you hear them complaining and using anything they can as an excuse. It’s just great.”

Hearing Farnsworth’s excitement when talking about the athletes and all their excuses, I had to ask him his most memorable moment from past events. “It’s tough to just pick one,” he said. “Chris Paul and Roger Mason are intense—they practice and prepare just as hard as they do on the court. John Wallace and Allan Houston had an intense finals matchup last year, and John Wallace still complains about how he was cheated 11 months later. He’s really good, he’s like the Phil Niekro of table tennis. He has you hopping around all over the table. Jeff Schwartz, Founder of Excel Sports Management, he constantly complains about the lighting and insists on bringing his own paddle. It’s a one of a kind event, it truly is.”

So, you know what you need to do: Go hit up your local Dick’s Sporting Goods, grab a paddle, some tape, wrist braces and headband and get your mind right for a great night supporting a great cause. TopSpin will hold its annual NYC event November 6 at the Metropolitan Pavilion at 6:30 p.m. EST. Tickets to attend the event are $125, and tickets to play in the event are $225. All proceeds will go to charity. More than 1,200 people are expected to attend.