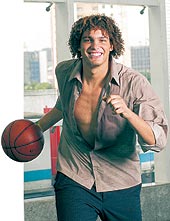 QUOTE OF THE DAY
“I can tell you there are guys in the East who don’t like playing against me. Richard Hamilton (Detroit Pistons guard) is one of them. He just don’t like it when I guard him.” — Ruben Patterson.
THE LINKS…
• Remember our KG story that we ran a week ago? Well, they found it in Minnesota.
• Ruben Patterson, the formerly self-proclaimed Kobestopper now known as the Nannystopper, says this year he’ll be the Ripstopper. I’m just glad Richard Hamilton doesn’t go by “Dick.”
• Ron Artest is scheduled to begin five days of community service in Detroit today. Strange, because when he was here in the office the other day I asked him how long he’d be in New York, and he said, “For a minute.” I thought he was being figurative, but apparently not. Would be cool if became friends with Boy George while they were sweeping the streets. I’m guessing that won’t happen, though.

• Chris Wilcox is good and all, but comparing him to Shawn Kemp? Please.

• The bad news is that Anderson Varejao suffered a foot injury in Brazil’s game against France. The good news is that his hair is just fine. (His foot’s all good too, apparently.) Also, Tony Parker hurt his finger (grabbing someone else’s jersey) and could miss France’s game on Saturday.
• Good stuff on the Little General‘s two-week trip to Africa.
• Can someone tell Bob Kravitz that the Indy Star is the only big paper covering the Pacers, so he doesn’t have to sit around to make sure he’s available to cover the oft-promised Al Harrington press conference?