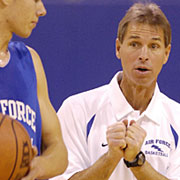 There is a story that has somehow — by some remarkable feat in this day and age — been passed over by our common media. It’s a human interest story more human than newspapers are used to; just some successful elbow grease. Unlike the two weeks of New Orleans stories that we were almost (rightfully) inundated with, this team is apparent right now and they’re not going away. It’s a profile that, say, a US President might use during his State of the Union if he wanted to cite the results of hard work in the name of our country

Don’t worry, this has absolutely nothing to do with Dikembe Mutombo.

It has everything to do with a team that you may have never heard of.

The Air Force Falcons — those same ones representing our country, the ones that weren’t even on the college basketball map until last year — are conspicuously off the radar. And they’re not off the radar because of combat missions.

So why haven’t you heard of them? Well, it’s the same reason why they’re so admirable to begin with.

This is a team with no particular star. Senior Dan Nwaelele and his 15 points per game is their leading scorer out of default, a 6-5 senior shooting guard who is second on the team in minutes. Otherwise, it’s just a bunch of cadets. Eight regular rotation players. The scoring is distributed, five score more than nine points a game.

That’s how they win. They spread out their points and their rebounds. No egos to track down. Everyone is content with their minutes and sixteen players have played this year. No one on this team will be drafted, unless it’s into the military.

But isn’t this what the Air Force Academy is? Isn’t this exactly the type of ingenuity that is supposed to define America and its armed services?

“We’ve got a bunch of cadets who are just playing their butts off,” he told the AP after their 72-39 romp of TCU last night.

This is the same Bzdelik who went from handling players who only answer to money, as the coach of the Denver Nuggets, to handling players who only answer to “sir.” He loves his players, too, and preaches their talent to the media after every game. That reciprocated respect from player-to-coach and coach-to-player has put this team in a position to win.

They hung around with Duke. They slipped up and lost to Utah by six. Otherwise, this team is unblemished both on and off the court.

So if you’re looking for a real America’s team, one that not only encompasses the underdog angle that we so cherish, but, you know, actually is America’s team, then hop on the #10 Air Force jet now.

Because it’ll be full by the time they’re making noise in the tournament.

Onto the Top 10 where we’re counting them down this week for the sake of our favorite Falcons.

10. Air Force (19-2) – They really deserve this. Check them out, they’re on the regional Fox Sports stations practically every day.

9. Pittsburgh (18-3) – Everybody get out your “AARON GRAY SUCKS BUT LEVANCE FIELDS IS THE TRUTH” tee-shirts. Ever since we called out Pitt a couple of weeks back for relying a bit too much on their actually-pedestrian center, Fields has taken over. It all came to a head last night, 6-7 from the field, all threes, as he lead the team in minutes and shots en route to a 67-51 victory over Cincinatti. Oh, and they’re tops in the Big East at 6-1. The second part of that tee-shirt is becoming a bit more of the truth

8. Kansas (17-3) – I think this would be a good time to tell you that these rankings are going to look eerily familiar this week because the Coaches and AP Poll Top-10s are EXACTLY THE SAME (AND EERILY CORRECT [WHY AM I YELLING?]). Back to the point — this team continues to be four deep with Brandon Rush, Darrell Arthur, Mario Chalmers and Julian Wright. A grand total of one shows up to each respective game, except when none showed up to the 69-64 loss to Texas Tech last week.

They always have that fallback win against then-#1 Florida. They play Texas A&M in a week. Show me a segue.

7. Texas A&M (16-3) – As I write this, I’m watching the highlights of Texas Tech hit five threes in the second half and make Bobby Knight look very good against the Aggies. Maybe they should be lower, but looking at the box score I can’t tell why A&M lost the game. The Red Raiders were outrebounded by ten and their shooting percentage was about 5% lower. Was this turnovers? Any of my much-smarter-than-me readers watch this game?

6. Ohio State (17-3) – Yeah, they slid their way past overrated-then-rated-then-overrated-again Tennessee. But show me a quality win anywhere else. Florida ate them alive. Wisconsin destroyed them in a game that they needed to win.

If this is going to be my weekly call for Thad Matta to use Greg Oden more, I’ll just leave their blurb blank next week.

5. Oregon (18-1) – Give these boys some lovin’, please. They lead the Pac-10 with a scarily tough schedule. #23 Georgetown? Win. #8 Arizona? Got ’em. #1 UCLA? Somehow, someway. If they didn’t slip up to USC, this team would be the only undefeated team in the country on the back up Player of the Year candidate Aaron Brooks.

And they’re listed behind both the Aggies and Ohio State in each poll. Explain that to me. Please.

4. UNC (17-2) – Everyone put on your sweater vests. Please, bouncers, check their names in the guest books. Valet parking is available upon request.

This the country’s elite. The following Top 4 are the established teams who have beaten the almost-established teams in big conferences. The Virginia Tech loss (a surprisingly fun watch) is keeping this team out of the top spot, but UNC — just like Wisconsin, just like Florida, just like UCLA — could be the best team in the country anyway.

3. Florida (18-2) – Maybe it was the Patriots-Colts game that got me on this, but I realized something this week that completely shook up these rankings.

Even if a team is practically the same as the last year, even if the turnover is microscopic, it’s still a different year. Those Colts, who were probably worse than the last years Colts, still found a way the Patriots, who were undoubtedly better than last year’s Patriots, for the first time in this year’s playoffs.

So why should an 18-2 Florida team be ranked better than a pair one-loss teams with better schedules?

2. Wisconsin (20-1) – The Badgers consistently beat the teams they need to beat. They play some of the best teams in the country on a weekly basis. They had the obligatory inexcusable loss to Missouri State earlier in the year. They have the best wing player in the country in his senior year and they do not make mistakes. Sounds like a #1 team to me.

Maybe next week. Beat Indiana on TV and watch UCLA-Oregon with keen interest.

1. UCLA (17-1) – I think we know how good Oregon is now. The then-#17 Ducks shut down this immaculate starting lineup two weeks ago.

Since then? UCLA took care of business against a streaking USC team and #12 Arizona. They have another crack at Oregon a week from today. Sounds like a #1 team to me.

But maybe not next week.

The more comments, the more tee shirt ideas we get. (I really want one of these AARON GRAY SUCKS shirts. Somebody needs to work on that.)