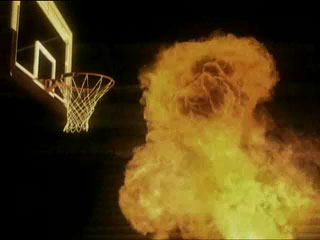 Oh, hi! Is that you? I couldn’t tell, what with the debris everywhere and all.

It’s so good to see you! I didn’t think you’d made it through the weekend.

What’s that? Hm, that looks to be a fiery comet. Oh, underneath the fiery comet? Gotcha. That’s the remains of UCLA’s unbeaten season. It’s too bad, really. I thought this would happen much later, maybe on the 18th when they play Arizona, but the sky had to up and fall on them Saturday against Oregon. Guess they shouldn’t have Ducked out on that last jumper.

But, hey, here’s something we can all make light of, even post-basketball Apocalypse: Duke sucks! No, really. Virginia Tech was able to win the game of the eight-day-old year and stave off the Blue Devils in overtime to make my otherwise cataclysmic sports weekend somewhat bearable. Even after refs failed to call an obvious McRoberts travel, Jamon Gordon hit one of those gritty jumpers that made Cameron Indoor quiet for the second time this year.
Deron Washington then proceeded to completely emasculate Greg Paulus for the second time in the game, blocking his would-be game winner into the second row after literally jumping over him in the second quarter.

No, that doesn’t remind me of anyone named “Eli Manning.” I don’t know an Eli Manning. Look, if you want any help getting over that river of plutonium, I suggest you stop saying that name.

Anyways, it was good to see you survived that initial shock of the Saturday that completely destroyed these rankings. I’d sit and talk about Alabama and Notre Dame, but I have to go build a shanty so I can put up a Clemson poster inside of it. And, you know, have a house.

From all of the rhetoric, I was expecting Dick Vitale to scream a special report on how the team has a pregame screening of the Wiggles.

Besides that one slip-up to Gonzaga, which is fast proving to be an aberration, this team full of people too young to make a run has the second-best record in the country against the toughest schedule. They beat Ohio State. They just destroyed a good Florida State team this week.

These Tar Heels have already grown up and it’s time to see it that way.

2. UCLA (14-1) – I refuse to let a team who was number one in the country slide three slots (we’re looking at you, AP Poll) because they lost by a field goal to the 17th ranked team in the country.

Are these people nuts? They lose one (1) game and the fact that they have the best starting lineup in the country should be completely ignored? They’re probably still better than UNC.

AP, stick to the wire.

3. Florida (14-2) – I’ve come to realize something: I’m that guy from that cancelled syndicated TV show who got the newspaper the day before it came out and went out the next day and fixed everything. I have no idea what this show is called and, no, I don’t do the second part of it because I’m a horrible human being. But, I must admit, it’s pretty awesome being omniscient.

I know this because I wouldn’t drop Florida out of the top five in the last rankings solely because they won the National Championship last year and I assumed they’d turn it around. It happened a lot quicker than I projected. They beat up on Ohio State (which is becoming a trend for TOP 10 teams, apparently) and Georgia and are slowly, silently getting their footing.

UNC and UCLA, feel free to hit the panic button.

4. Wisconsin (15-1) – This is a glaring omission from the top three, but the thing about numbers is that you can only have three teams in the top three. Funny how that works.

Is it enough to say that Alando Tucker is breaking away as the National Player of the Year? Really, no one is coming close.

Honestly, Alando, you can have it. And enjoy the perks of being a lottery pick.

5. Ohio State (13-2) – Listen, young men, I’m giving you another chance. Realistically, Kansas could be here. Maybe they should be here. But they’re not and here’s why:

I have faith that you will beat a team worth its salt. Maybe #4 Wisconsin tomorrow night in Madison can propel you back up there. Maybe (still overrated) #20 Tennessee at home on Saturday. Preferably both.

But I don’t want to have to remind you again: you have the Prophet Greg Oden. This “losing to ranked teams” stuff has to stop.

Because Bill Self would be coach of the year. Brandon Rush and Mario Chalmers would be behind ‘Melo in this ish of SLAM. The Jayhawks would be right up there with the UCLAs and the UNCs.

7. Arizona (12-2) – My brooding man-crush with this team continues and only gets stronger when they put together a hearty second-half comeback to beat #20 Washington on the fourth. But they have to go and blow it to Washington State the next night. Beat the teams you’re supposed to beat. You don’t want the talk Kansas got, do you?

This team should be fine, anyway. They’re uber-talented and have the second best starting lineup in America and they’re in the brutal Pac-10, so voters will treat them kindly.

May the love continue to March.

8. Pittsburgh (14-2) – I’ve yet to be proven wrong about the Aaron Gray Actually Sucks Theorem. This should be a tee-shirt.

Some quality wins against Syracuse and South Florida, but I really don’t see it with this team. Uconn and Marquette should do nature’s work with them in the next couple of weeks so we can slide Butler in here some place.

But they’re the only undefeated team in the country and I love it. Let them do something wrong before you keep them out of the Top 10.

They’ll lose eventually. They play Maryland, Duke, UNC and BC about fifty times in the next two weeks. If Boise St. has taught us anything, let them bask now and let them be beaten later.

10. Oklahoma State (15-1) – Not sure why this team is behind Texas A&M everywhere. OK St. is the better team in this conference and have two wins against ranked teams with one less loss.

But how can I complain? Two more teams keeping Duke out of the Top 10.

Feel free to comment below to get your name in next week’s.