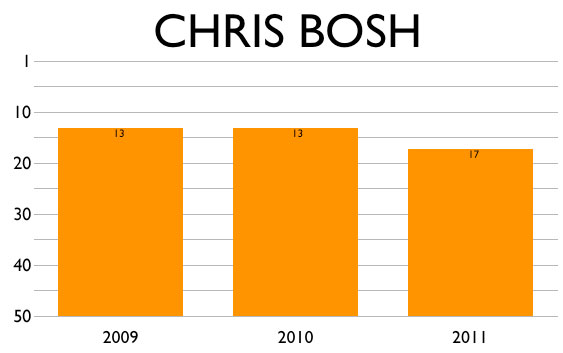 I had lunch one afternoon during the NBA Finals with a sports media person who doesn’t primarily follow the NBA. As soon as we sat down, the first thing he asked me was, “What do you think about Chris Bosh?”

Because Chris Bosh stepped forward with Wade and Bron, he was considered part of the Big 3, at least during that introductory press conference/celebration. But Bosh never seemed to fit in, as an aesthetic or as a personality. He hung out in the Hamptons before the season started. He read books in his locker before games. Wade and Bron did their press conferences together, while Bosh went dolo. When the Heat lost a late-season game and Spoelstra said there were tears in the locker room, Bosh was fingered as a likely suspect. When the Heat lost the NBA Finals to the Mavericks, YouTube lit up with videos of Bosh appearing to cry on his way to the locker room.

As the ‘10-11 NBA season moved along, it became apparent that Chris Bosh wasn’t Wilt or Russell. Which we all knew going in, of course. He was always just Chris Bosh, a dude with a nice step-back jumper and a great pump-fake, who played better facing the basket than he did down under the rim. It wasn’t clear exactly what the Heat were looking for when they signed Bosh, but they should’ve known what they were getting: Bosh left Toronto as the franchise’s all-time leading scorer and rebounder, so he’d done this before.

So I found it somewhat telling that when I sat down for lunch with a person who knows a thing or two about sports, it wasn’t LeBron or Wade or Dirk or Cuban that they asked about, but it was Chris Bosh. My answer to the question? I don’t know Chris Bosh personally, but I like anyone willing to speak their mind, choosing truth, sometimes even to his own detriment. I like people who are so invested in whatever it is they’re doing that they could be driven to tears when they can’t succeed. I like people who seem to be concerned with exercising their minds by doing things like—gasp!—reading.

What we know is this: Bosh will give you about 19 and 8 every night. Yeah, he might have some 1-18 games, but on the whole he usually shoots about 50 percent. He gets to the line a few times, bothers some shots inside, mostly stays out of foul trouble.

And that’s about it. Maybe if Bosh avoided the media at all costs and refused to say anything, we’d think he was just some stoic guy who was consistent and one of the better power forwards in the NBA. Maybe if he hadn’t signed along with LeBron and Wade but had instead showed up a month or so later, we’d think he was a perfectly competent piece of the puzzle for the Heat, but not the post lynchpin some expected him to be. Or perhaps he’s just too honest or willing to reveal too much.

For all as we know about Chris Bosh and who he is, to truly appreciate him, maybe what’s most important is having an understanding of just who Chris Bosh will never be.