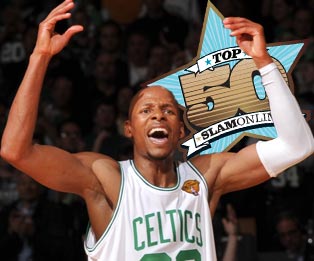 It’s that time of year again, when we ramp up for the NBA season by painstakingly revealing our rankings of the Top 50 Players in the NBA. We’ve done it each summer for a few years now. The criteria is simple: The players are ranked based on what our esteemed panel expects them to contribute on the court this upcoming season.

To be totally fair, I’m not really sure who our esteemed panel is comprised of. I do know that Ryne sent out an email to a huge list of SLAM and SLAMonline contributors. If they got their rankings back in time, their opinions were factored into our list. In fact, I wrote a Top 50 and sent it in, and I didn’t even have Ray Allen on my list. And yet here I am announcing to the world that Ray Allen finished as number 50 on SLAMonline’s list of the NBA’s Top 50 players.

It’s not that surprising Ray Allen cracked the 50. He was

on my original list of names that I compiled, but I had to drop him to make room for Pape Sy. (That’s a joke.) Actually, he was the last person I cut from my list. Ray finished 36th last year on our list, and our voters seem to be expecting Ray’s skills to continue to wither with age. After all, last year his points per game dropped for the fourth consecutive season down to 16.3, the lowest since his rookie year. Sure, that’s partly a function of his age — he’s totaled almost 38,000 minutes over 15 seasons and is entering his 15th season. But it’s also a sign of his willingness to step back and allow his teammates to shine — his 12.2 FGA per game was his lowest number in that category also since his rookie season.

Despite his age, Allen’s still remarkably durable, missing only 12 games over the last three seasons. Most importantly, Allen’s specialty is shooting, and shooting touch doesn’t necessarily fade with age. He might be a little slower fighting through picks or making defensive rotations, but give him space to launch and he’s probably going to knock it down. Don’t forget, just three months ago the man put 27 points on the Lakers in the first half of Game 2 of the NBA Finals.

I’ve been a basketball fan my entire life. I may never have been a huge Ray Allen fan, but I have always appreciated that he always plays the game so freaking elegantly. He consistently makes the tough stuff look simple, easy even, as though he were some kind of humanoid programmed by Dr. Naismith to play perfectly fundamentally sound hoops. Probably the most interesting thing Ray Allen ever did was play a character in a movie. Or that time he got his face painted like a tiger. But that shouldn’t make us less grateful for Ray being graceful.

Ray Allen has won a gold medal, an NBA title, been an All-Star (nine times) and a three-point contest champ. He once played the lead, but these days he’s content to be just a player in the band — a really good band, granted — with a realistic shot at winning another NBA title before his freshly inked two-year, $20 million contract expires. And according to us, Ray Allen will be the 50th best player in the NBA this season.

Over the next few weeks, we’ll be counting down toward that number one spot, so check back in with us and see where your favorite players landed.

And of course, if for some crazy reason you feel like commenting on our rankings, we have this system down below the posts where you can make your voice heard.