Troy Murphy gets a side job 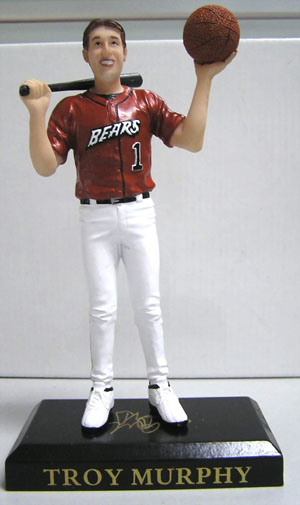 I was driving around, listening to some NY sports talk radio last night, when for some reason New Jersey native Troy Murphy was a call-in guest. Now, my first instinct was to think that he had been traded to a certain East Coast NBA team, but I was so very wrong. It turns out, Troy just landed a side job as the third base coach for the Newark Bears, a minor league baseball team most famous for Rickey Henderson’s latest attempt at a comeback and the magical Canseco brothers.

The back story is that Sports Illustrated asked Troy what he would be doing if he weren’t in the NBA. His answer was:

“I would be third-base coach for the Newark Bears. I’d wave everybody in, no matter what. It’s fun eating sunflower seeds, wearing the uniform and doing the signs.”

A noble cause, but I prefer what Troy told the host on WFAN last night, which was something like “I wish I’d asked for something else. You know, they’ve got a swimsuit issue…”

Either way, good luck Murph. The first 15,000 fans at the game get this frighteningly lifelike figurine thing on the left.

By the way there is going to be another mini-monsoon tonight, so if this inspired you to head out to the game and it is cancelled, don’t get mad at me.