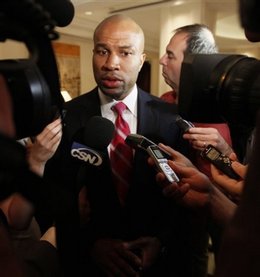 Following a six-hour bargaining session in Manhattan yesterday, Commissioner David Stern and Players Association president Derek Fisher were careful in their remarks, but did offer a small glimmer of hope that NBA basketball may be played in 2011-’12.

Both sides promised to stop taking shots at one another through the media, and with time quickly running out until things like training camps must start, players and owners have scheduled additional meetings in the coming weeks.

It was just the second bargaining session since July 1, and the longest in many months. If the duration was a sign of progress or a reason for optimism, neither side would say so — at least in part because they have promised to keep the negotiations private. “We’ve just decided it’s not in anyone’s best interest to get into what actually happens in the meetings from this point on,” Derek Fisher, the president of the National Basketball Players Association, said after emerging from the meeting just after 4 p.m.

“The important thing is our agreement with the union not to say what we discussed, other than to say that we’re continuing to have meetings,” [David] Stern said. “And I think that the best way for us to get to a deal is to continue with that, rather than just satisfy curiosity” of the public.

More meetings are expected in the next week or so, although both sides declined to offer specifics. The urgency has increased with the turn of the calendar page. Players are scheduled to report for training camps on Oct. 3, with exhibition games scheduled for the next week.

Billy Hunter was less careful with his words when addressing the media following the meeting, plainly stating that very little progress has been made in the talks, and that there’s absolutely no reason for anyone to get excited about a possible resolution.

From the Daily News: “We haven’t had a breakthrough yet,” union executive director Billy Hunter [said]. “We both realize that we need to continue to sit down and meet and talk to get the kind of breakthrough… to make a deal. We have to get that breakthrough, somehow.” … “I wouldn’t say the fact that we’ve decided to meet again is a sign of progress,” Hunter said. “What I would suggest is that we need more meetings for that to happen.”