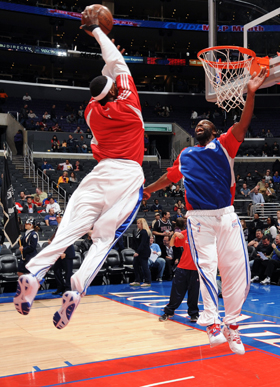 Well, at least we now know one fact about Mike Taylor–dude has springs. Thanks to the Clippers, we’ve gotten the chance to see the 2008 second rounder get some burn. Let’s just say he hasn’t slept on the golden opportunity for some tick, watching his team sink itself to a heavier ping-pong ball. M.T. is determined to get something out of his situation wearing L.A.’s other jersey. Will Taylor’s hops alone earn him work in the League next season? No, but if he does find his way into a guarenteed contract, you know who the new Dunk Contest favorite will be (Hint: It’s not LeBron).