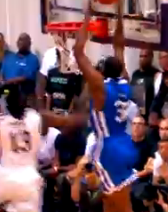 Few basketball players, or living, breathing people in general, were busier than Kevin Durant was during the summer of 2011. KD shot a movie, filmed commercials and played flag football, but more than anything, the OKC forward stayed in the gym, hooping at a variety of charity games across the nation. Check out his offseason highlights above, courtesy of BallisLife.