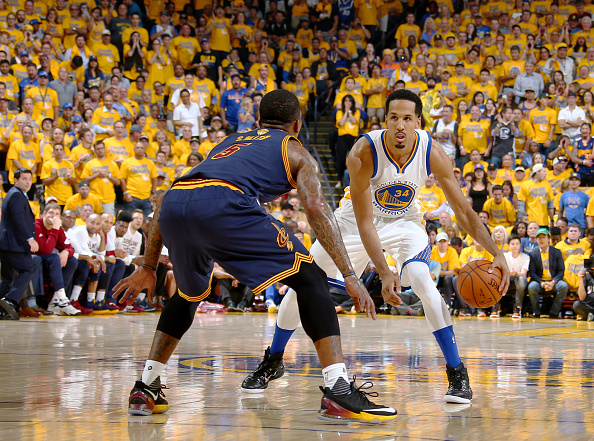 The Warriors officially drew first blood in the 2016 NBA Finals, taking Game 1 at home on Thursday night, 104-89, behind a huge effort from reserve PG Shaun Livingston.

Oracle Arena was going bonkers for the start of Game 1 of the Finals, ready for the Splash Bros to make it rain. Instead, it was the likes of Harrison Barnes, Andre Iguodala and Leandro Barbosa who got the fans fired up in the first half against LeBron James and the visiting Cavaliers.

At halftime, the Warriors led 52-43 thanks to a big advantage in field-goal percentage (52 percent for the Dubs, 36 for the Cavs) and relatively spread-out scoring from their starting lineup. Meanwhile, Cleveland’s Big Three accounted for 34 of their team’s 43 in the half—that despite a 1-11 second quarter combined for Bron and Kyrie Irving.

After a back-and-forth third quarter, we headed into the fourth with the Dubs up, 74-68. And that’s when Shaun Livingston happened. Dude went absolutely bananas, helping the Warriors break the game open while Golden State’s stars sat on the bench.

Livingston finished with a career playoff-high 20 points for the game—the same as Steph Curry (11) and Klay Thompson (9) combined for in total. Seriously Livingston was everywhere. Along with Iggy (12 points, 7 rebounds, 6 dimes) and Barbosa (11 points), the Warriors’ bench just completely exposed the Cavs’ bench (10 points total).

Kyrie, LeBron and Love combined for 66 points but didn’t get much help in the scoring department on what was an awful shooting night for the Cavs. They’ll look to rebound in Game 2 on Sunday night.