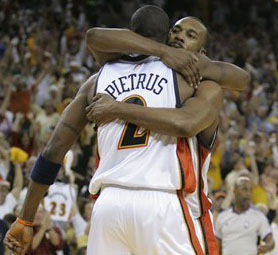 Avery just got outcoached again. He puts Gana Diop in the starting lineup, Nellie counters by going big with Andris Biedrins. When is AJ going to realize that this is a a matchup series and not a talent series? For the last time, with all hope, put in Dampier and be done with it.

This pace lends itself right to Dallas early and, after four minutes, we’re on pace for a 27-24 first quarter for Dallas, which is exactly how it should be for Dallas.

This was (hopefully) Avery Johnson’s gameplan in a microscope here: Monta Ellis is forced into taking contested fadeaway jumper with seven seconds left in the shot clock, the ball is walked up the floor and Josh Howard patiently finds his spot, drives, gets contact and a foul to an early eight-point lead. I’ve said the word pace more this weekend than anyone watching that awful NASCAR race tonight. Or was it tomorrow? Please stop me if you care.

It may actually be more fruitful for the Mavericks to pull back literally all fast break opportunities, no matter what the numbers are. After a missed three-on-one layup, Warrior fans are back to being Warriors fans. Hey, now there’s finally a second reason to move to Oakland that has nothing to do with selling narcotics to minors!

Dirk was all over Baron Davis on a switch, and Baron Davis found an inch of daylight and still drained it. He looks like D-Wade did this time last year, nailing contested jumpers.

Subtle-but-symbolic move by Avery Johnson: Kevin Willis-saurus takes over burner Jose Juan Barea’s spot at the end of the bench. This would give you the idea that Avery Johnson is playing big men, but we haven’t seen Erick Dampier yet. Hm.

Hard to believe that the Mavericks are playing at possibly their highest level and they’re still only up five by the first timeout of the second quarter.

Josh Howard is 8-of-11 because this game plays right to his style. He can follow his own shot and get any elbow jumper he wants. They should be running him off screens if Dirk is ineffective at it right now.

I desperately wanted Monta Ellis to get a chance to finish that alley-oop from Mike Pietrus. Not just because he hasn’t scored yet, but watching him get up there is just so adorable. Wook at the widdle guy!

Some horrible shot selection from anyone not named Howard or Nowitzki tonight for Dallas. I guess you could argue that Nowitzki’s shot selection is off if he has only taken four shots, but he’s made three of them.

Pietrus is making himself some money tonight after that blocked shot. Man is he athletic. He’s gonna need a nickname after this game.

Del Harris sightings all over the place tonight. The last time I saw him this much was when Avery was new to the job. Again, there is symbolism here, but you’re not stupid, reader — you can figure this one out.

Jason Terry had his clock cleaned going out of bounds there to no call. This isn’t the Dallas bias that is inside me screaming to come out (yes, there’s a column coming about this), this is an official who is getting a little swept up in it.

Enormous Pietrus three. Is he a free agent? MULLY GIVE HIM A MAX.

Howard has 5/11ths of Dallas’ points at the end of this half after a jumper. I’m bad at math, but I’m better than Josh Howard. (610 on your SATs? Combined?)

That Dirk backdown layup is only three games late, thanks. Five-point Dallas lead.

Reggie Miller telling Dirk to never pass the ball in the playoffs is Reggie Miller in a nutshell.You can’t tell me when you’re double-teamed that you shouldn’t pass it to a guy who is wide open for a layup. Just because Greg Buckner can’t make a layup doesn’t mean it isn’t a better shot.

OH MY GOD. Even a day later, I think you’ll know what this refers to.
Halftime:

I’d have notes here, but I’m using the time I would spend writing them to mourn that fact that I sympathize with Charles Barkley.
Third Quarter:

Back-to-back threes and Avery Johnson is currently on his Blackberry checking Craigslist for head coaching positions.

Running off screens, getting easy jumpers for Jason Terry and quick layups is exactly how the Mavs needed to start this half. But we did say this about the first half, too, so what the hell do I know.

Baron Davis makes his “that hurt my face when you called that foul” face to the ref on a clean block. But refs, like me, don’t trust people fully trust people with well-groomed beards.

I think we should rename Baron Davis to Jebediah for the rest of the playoffs. Just a suggestion.

Matt Barnes just went literally the length of the floor without encountering a defender. I’d make a joke here, but I’m busy finding out visitation hours for Mark Cuban in the next week. 72-67.

Nowitzki was again destroyed to no call. Then Dirk called for a foul playing legal defense on Davis on the perimeter. Just because he’s playing well doesn’t mean you have to make him play worse, Dan Crawford.

Warriors fans are adept at arguing everything. Richardson’s feet were moving and inside the restricted area, but this still merits a bulls–t chant, I guess. Is this a mid-90s Springer episode? I admire the passion. Still the best fans in sports.

Baron Davis with another pull-up three that was “the worst decision I’ve seen since the Nixon’s involvement in Watergate” type action. This time it goes in. Screw Dwyane Wade, this guy is playing like MJ.

Baron Davis again with the end of quarter antics. A steal and a dunk. If they win this series, they cruise to the Western Conference Finals at this point. I’m not much for the overly sentimental, tacky, ESPN Classic one-liner stuff anymore, but we’re watching the NBA change through one guy in one game.

The Mavericks come out for the fourth quarter mopey, like they already lost. And they’re up one. They just don’t care.

Stackhouse goes to the rim twice in a row. I outright hate his game, but it’s the only way the Mavericks are going to win this series. (This is something I’ve never understood: if hogging the ball until you get to the free throw line is the leadership stuff that Chuck and everyone talks about, then that’s not actually leadership. But this is the only thing that’s both working and slowing the game down, so Stack better keep doing it.)

Hack-a-Biedrins would be a legitimate strategy. He’s 0-for-1 at the free throw line right now, but he shot 52% from the year and terribly down the stretch. It also forces the ball to be slowed down a pretty substantial amount. But I’m still not sure Avery thinks he should slow it down, which is the disgusting part about all of this.

Stackhouse again, this time on a called play off a screen. If you’re a Mavericks fan, don’t you want to see this play run over and over again until he runs out of legs?

They keep cutting to this guy who looks like James Lipton who apparently is not James Lipton. But it’s nice to know Dusty Baker is having a good time and Ron Artest isn’t out drunkenly fighting his pitbulls or something.

For the first time in the history of the United States, it’s a good day to be in Oakland. Loudest arena in the playoffs by far. Man is it refreshing to see a group of fans who care this much.

Stackhouse stuffed on a three and Biedrins finishes with the hoop and the harm. This is starting to get deadly serious for a 1-seed. 93-90.

A Richardson steal and a trip to the line on a breakaway. Dallas just doesn’t want this badly enough.

Another Baron Davis stepback jumpshot. Can you believe this? Really think about this. A 42-win team over a 67-win team in a seven game series? They changed because of teams like the Warriors. Three years ago, they’d be in the second round right now. Weren’t the Mavericks supposed to be the team of the decade?

Big Terry three. But Barnes is left too wide open when a Dallas guard forgot to fight through a screen. That’s pathetic and should never happen. The Mavericks deserved to lose this game.

The Mavericks leave their last huddle like they’re getting out of the car in a funeral procession. Dirk hits a three on a second shot opportunity, but with no timeouts, a free throw seals it. And J-Rich does just that.

That Baron Davis 50-foot flickshot to end the half, both in terms of momentum and the final score, was the difference in the game. Or Dallas could’ve tried to stop any of his other 30 points, but they failed miserably in any attempt at execution.

103-99 Warriors. If you check back here later today, I’ll tell you whose fault it is for Dallas. And it’s not just Dirk.