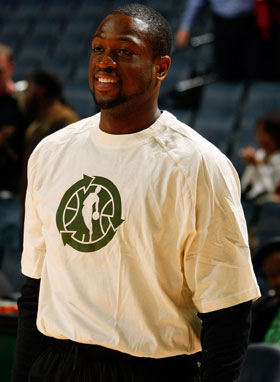 Is it the NBA’s goal to play in 100 percent organic cotton jerseys, have players lace up in sneakers made from trash, and shoot recycled Spaldings? Would players be willing to trade their gas-guzzling H2 hummers for Acuras? Not yet and probably not ever, but teams and players are at least sending the right message about the environment this week.

Mutoni gave us some quick details before, but you might be interested in some more info about the League’s first Green Week April 2-10:

“To further encourage fans to reuse and recycle during NBA Green Week, the NBA Store in New York City will host “Recycling Dreams,” a footwear drive to collect gently worn athletic shoes. Customers who bring in shoes will receive a 20 percent discount on their purchase of new athletic shoes. All donated footwear will go to Hoops 4 Hope, a global not-for-profit organization that supports youth development throughout southern Africa with programs that teach life skills through the game of basketball. In addition, the NBA Store, NBAStore.com, Dick’s Sporting Goods and select team retailers will feature the 100 percent organic cotton adidas shooting shirts, recycled Spalding basketballs, and Team Bean reusable shopping bags made from recycled materials, in addition to more environmentally friendly items, giving fans the opportunity to ‘buy green.'”

In truth, donating your old sneaks for an NBA Store discount is a fresh idea, but carbon credits and reusable shopping bags have questionable affects. Spreading the green message is really what counts, and the NBA has launched a pretty successful inaugural campaign. The League launched NBA Green, featuring everything from tips for fans to interviews with NBA players.

Oh, and if you happen to like the organic cotton shirt DWade is modeling at Heat home games, be sure to support the cause by purchasing a $25 Green Week t-shirt! 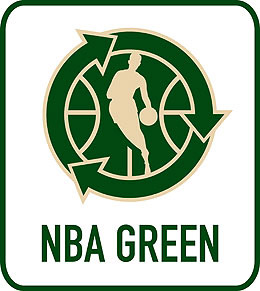