When you make a promise… 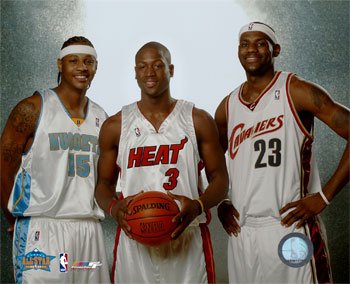 So now Dwyane Wade is going back on his word and following Carmelo who followed LeBron. I love the solidarity, and it’s not my money they’re fighting for, but what’s going on here? Has the phrase “verbal agreement” lost its sanctity? Jiminy Cricket was just squashed on the windshield of a Mack truck. When you make a promise… ah, never mind. I know a verbal agreement is not legally binding, but how about some business ethics? This is how inflation economies operate. In the ever changing NBA contract marketplace, each one of these guys deserve a max contract, and they can get them anywhere. But is all of this maneuvering necessary? LeBron James, Carmelo Anthony, and Dwyane Wade can live the rest of their lives without paying for a meal, clothes, car, home, and so on. People will just give them free stuff because of who they are. And now they need not only tens of millions of dollars, but they need to squeeze every last bit of money they can possibly make out of the teams that drafted them while keeping their options open in case those teams that are making them embarrasingly rich don’t live up to their competitive standards.

Let’s say, for example the Cleveland Cavs are unable to surround LeBron with the kind of talent he needs to win 8 championships in a row. I’m no capologist, but I think it’s safe to say one thing that might keep the elite talent out of Cleveland is the fact that one player will occupy the largest possible chunk of his team’s cap allowance, even as it goes up over the years. If LeBron inc. is the economic powerhouse that everyone says, they should realize that it’s smarter for him to take less money to play basketball, giving his team more flexibilty to sign the best free agents, and then be satisfied with him pulling in billions in endorsments worldwide. But hey, I guess it’s a “respect” thing, and the best player needs to be the best paid. It’s competition.

Why, just a year and a half ago everyone was obsessed with Vince bashing because he decided he didn’t want to be a franchise savior like LeBronMeloWade. Over the past 20 years or so the only guys who were drafted by a team and delivered as their savior are Jordan, Hakeem, Duncan, Isiah, Magic, Bird, and Wade. The list of guys that failed is much longer, so it’s nice to see that the big 3 from 2003 and Chris Bosh are all staying put and trying to get it done with the team they came up with. I know, for now…

Over the past week, I’ve learned more about business and negotiating from watching this NBA offseason than I did from Microeconomics 101 – which was a huge waste of time by the way, and turned me into an English major. When I watch sports, I don’t cheer for my teams to increase value with a win. I just like to be entertained and see them score more points or runs than the other team. These players want to be all business, so let’s treat them like they want to be treated, as assets.

1. LeBron – has more leverage than anyone that has ever bargained for anything. He could walk into Danny Ferry’s office, take a piss on the rug like Big Lebowski, slap him around, say Duke sucks, and what’s Ferry gonna do about it other than beg for the opportunity to give Bron as much money as possible? That’s leverage, people. I hope each and every one of you knows that feeling once in your lifetime. I’m still waiting.

2. Wade – young champion, girls seem to like him, he’s a great player. But he plays for an old team, and although he just won a championship it will take some readjusting to get back there. He is beloved in Miami. They have to keep him forever just like the Yankees with Derek Jeter. Even though he’s only been there for 3 years, after all he’s done for the franchise it just wouldn’t be right to see Wade playing anywhere else. By the way, are they going to be able to pay anyone more than the league minimum with Shaq and Wade’s contracts on the books? My God. They’re Iverson and Webber-esque.

3. Carmelo – Interesting. On the plus side he’s a great scorer, one of the top regular season clutch players in the game, and he’s getting better at passing and rebounding. He’s definitely a franchise player, the guy that turned a sad Denver franchise around (along with the McDyess trade. Is there a team in the league the Knicks didn’t get screwed over by?). The off court stuff is what it is. Carmelo doesn’t turn his back on the people he grew up with, and though that’s commendable, it can sometimes lead to embarrasment. The Nuggets would like him to stay around for the rest of his career, but it’s not the end of the world if they have to trade him someday and start over. You can’t say that about the other two guys. If they were to leave their teams it would literally be the end of the world. Uh… sportswise.

It’s nice to see young men maximizing their value, although there’s nothing more annoying to me than when a professional athlete uses the phrase “It’s a business” during the season. It is a business, big business. But your job is to entertain people with a bouncing ball. Your job involves taking physical risks, resulting in everything from floor burn to broken legs, but when you start making this much money, it starts to become not worth it to play hard and take risks. I hate that about modern sports. Get that money, but more importantly let’s put an end to all this Financial Times talk and get the focus back on court. It’s going to be a long summer.