Who can say no to a perfect jump shot? 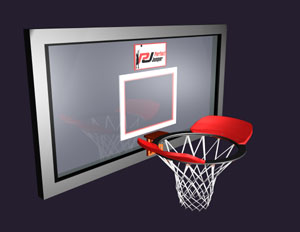 This year I let the inner fat kid in me out. I’ve dedicated my summer to eating all the food I can’t eat during fencing season, but at the same time I can’t stand to see myself get too out of shape so I’m taking this time to work on my game and, so far so good. I’ve been in Wingate Park (that’s one of Brooklyn’s best courts) almost everyday since the summer has started and you wouldn’t believe the things that go on in there. It’s definitely a wild park and I always forget how much I love that place. Since I’ve returned to “The Gate” they had WWE night: two of the refs had an altercation that resulted in a steel chair to the face of a 40 yr old man trying to make a few extra bucks. I love it! Dunker’s Delight has been going on and it’s quite entertaining. Dunks are worth 3 points so it’s been a non-stop dunk-a-thon out there (dudes could use a lot of work on their jumper).

So far my inside game has comeback and it’s better than I remember it to be, and like last summer my jump shot is still M.I.A. So I used my SLAM status (because I could do that and you can’t) and called the guys at perfect jumper to get some free equipment because this was bugging me. Surprisingly my shot has really gotten better! I didn’t think it was going to help me but it did. After all Carmelo uses it, and Bobby Knight co-signs it so I guess the proof is in the pudding (Melo does have one of the prettiest and most consistent jumpers in the league ). I wont be using it after the summer when i start back fencing but, I do have a 6’4” 16 yr old cousin who thinks he can play ball, he can always use a lil help with his jump shot, all these kids want to do is make the highlight reel these days.

It’s Wed, Aug 1st and that means for those who were waiting for Common’s album, the wait is over, you should have it by now and blasting it at the loudest capacity. I’ve had it for a week or two and it’s really good, lots of substance, great production, I think it’s Common’s best album, definitely a classic. Chi-town’s other favorite rapper Kanye West is only a month and some change away… for now, hopefully it leaks out and gets pushed up. I’m tired of waiting and I know you are too. From what I heard off the album, it looks like the Bulls are going have a good year (“They say My beats make the Bulls play better”- Kanye West). In the meantime, Mr. West is keeping busy with the production of his latest video. I hope you enjoy it as much as Ryan and I.