A report claims that the L will not allow Ilgauskas to don a Cav uniform this season again if they find out some kind of pre-arrangement was made between the two parties. Naturally, it’s something the Big Z camp denies categorically: “Zydrunas Ilgauskas’s agent, Herb Rudoy, is still speaking with Wizards President Ernie Grunfeld in hopes of working out a buyout agreement in the next few days. Ilgauskas won’t wear a Wizards No. 17 jersey, but there is speculation that the NBA won’t allow Ilgauskas to return to the Cleveland Cavaliers this season, either. The Los Angeles Times is reporting that the NBA has told teams that the league won’t let Ilgauskas go back to Cleveland based on evidence of a prearranged deal. When asked about the suspicions of a wink-and-nod agreement between Ilgauskas and the Cavaliers, Rudoy sent a text message that read: ‘There is absolutely no truth to it. Ernie and I are still working on a buyout!’ The Wizards don’t have to do a buyout for Ilgauskas, since they already have dipped under luxury tax territory. They certainly have the leverage to get the kind of financial relief they desire from Ilgauskas, who already received $600,000 from his trade kicker. Rudoy told Yahoo! Sports that he expects the two sides to agree on a buyout ‘Monday or Tuesday.”‘ 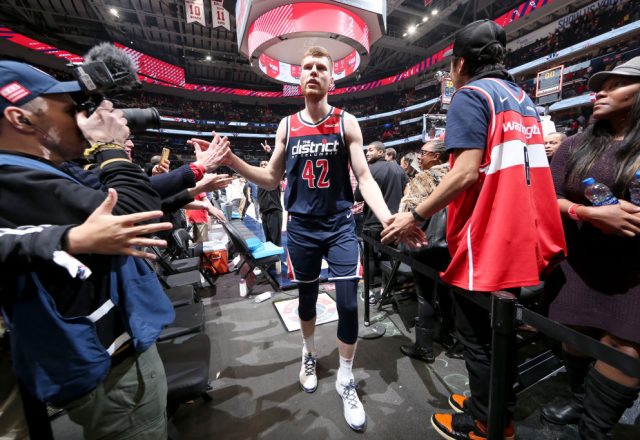