Without Davies, BYU Loses by 18 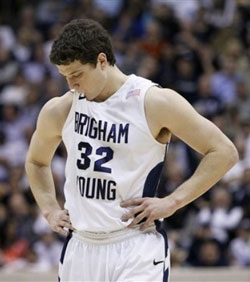 One day after Brandon Davies was dismissed from the team by BYU, the Cougars put their weakened frontcourt to the test against New Mexico. Despite 33 points from Jimmer Fredette, BYU wasn’t competitive in an 82-64 loss.

It’s obvious that the loss of Davies had an even greater effect than first realized. The three starters in the frontcourt for BYU combined for just 12 points and 9 rebounds. As a team the Cougars lost the rebounding edge, 36-25.

Meanwhile, more details have emerged from Davies dismissal. The reason appears to be premarital sex with his girlfriend. He is reportedly crushed by what has happened.

From the Salt Lake Tribune:

According to a source close to the program, Davies was “extremely remorseful, heartbroken,” but has accepted the punishment doled out by the school.

On Wednesday afternoon, the school confirmed that Davies’ dismissal was not due to anything criminal in nature, but would not acknowledge the specific portion of the honor code he violated, per school policy.

Among other things, the honor code forbids students from engaging in premarital sex, and admonishes them to “live a chaste and virtuous life.”

The loss on Wednesday is the third this season for BYU, two of which came against New Mexico. It also might have ended the school’s hopes for a No. 1 seed in the NCAA tournament. The Cougars have one final home game against Wyoming on Saturday to straighten things out before they enter their conference tournament. Chances are Fredette will need to do even more in March for his team to advance to the Final Four.