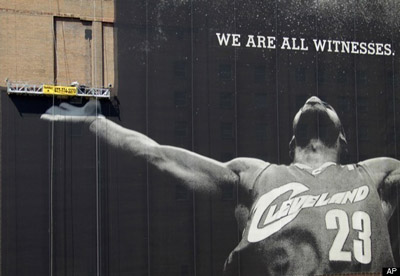 We wonder what, if any billboard, will take its place: “Workers began dismantling the 10-story-tall iconic image of James on a mural in downtown Cleveland yesterday. The billboard has dominated the city’s skyline for years but is being removed after the superstar announced he was leaving the Cavaliers for the Miami Heat. As strips of the image of James, his arms outstretched and head thrown back after doing his pregame powder toss, began coming off, pedestrians stopped on Ontario Street to take photos and cars pulled to the side for one last look at No. 23, who has gone from being a hometown hero to villain.”