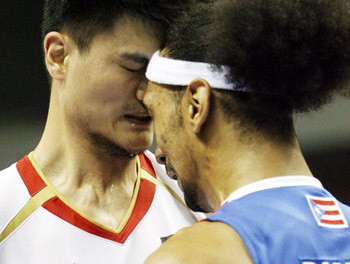 Celticsblog takes the negative route today, breaking down which young Celtics are the most likely to be busts.

Have you ever wanted to see Yao Ming head butt Peter Ramos? Me too! The Association has the photos, SLAMADAMONTH frames style.

Big shakeup at Blazers Edge. Lance Uppercut is out. Dave is in.

Well, Mark Cuban is having a blog war with… somebody about… something. I found out about this through Pro Hip Hop, which is funny because I found out about Pro Hip Hop through XXL’s Bol’s insane vendetta beef with Pro Hip Hop’s Clyde Smith – whose name I have noticed as a commenter here, though it might be coincidence.
Speaking of XXL… OMGthisissoawesomecanoubeliverthey’reonpereznoimeancanyoureallybelieveit?!?!?

This is a post on Father Knickerbocker called Salary Cap, Shmalary Cap. No further explanation required.