Yao Ming Done for the Season 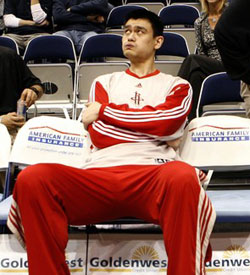 It seems like the third time it’s been reported this week alone, but this time the news is official: The ’10-11 season is over for Yao Ming.

The Rockets‘ big was the best center in the L for a brief minute, but injuries have become too much for the 7-6, 320+-pound Yao to handle. The Houston Chronicle reports:

Yao Ming’s season is certainly over. Less certain is whether his career will end, too.

Rockets team physician Walter Lowe said Friday that surgery is the “usual course of action” and “the smartest course of action.” Surgery would require seven to 10 months of rehabilitation to return to the court. Yao had not chosen a treatment plan and could opt to immobilize his left foot and ankle in the hopes it could heal on its own.

Will we see Yao Ming on an NBA court again? It depends on whether Yao wants to dedicate himself to playing.

A proud new father, Yao isn’t exactly stressed about his latest setback. As he told ESPN‘s Ric Bucher: “I haven’t died. Right now I’m drinking a beer and eating fried chicken. What were you expecting, a funeral?”