Black coaches in the SuperBowl 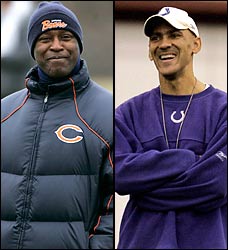 Right now I’m blasting Public Enemy’s “It Takes A Nation of Millions” album my favorite record ever, period. When Flav starts his “we gotta black QB in the Super Bowl” ad-lib he reminds me of two things. One Flav was crazy way before VH1 got a hold of him and two that was a really a big deal at the time. There had never been a black man starting as QB in a Super Bowl. Up until then black QB’s were basically non-existent and people really believed in all that bs about them lacking the mental faculties to get the job done. Now we’re here at another “big deal” event, that being, having the first two Black head coaches in the Super Bowl. Meaning we’re guaranteed to have a black man win, and during Black History Month too? Whoa, I’m wearing nothing but red, black and green for the next 4 weeks.

If I had a European inspired name I’d change it just so you know what the deal is. Yeah I’m joking because really I don’t care as much as people think I should or at least as much as others. Yeah it’s a great thing, don’t get me wrong. For all the trials and tribulations that Black men have endured in this country, anytime someone can prove the haters wrong it’s great. But I’m not jumping for joy out this mf, no way. To me what’s a much bigger deal is that the state of Massachusetts recently elected a black man as their governor (how many of you just read that and said to yourself “really?”). Deval Patrick is his name and while he may not be the first black governor ever he is the SECOND and the only one currently in office. That’s huge. And for those that never knew or never cared, Mass is a notoriously racist state. You forget because they always use words like liberal to describe it, which people think means all-inclusive or welcoming. Please, Boston was just as uppity Alabama as recently as 20 years ago and many parts are still off-limits to people like me when the sun sets.

This is much bigger than two Super Bowl coaches. Sure they can hire coordinators and strength coaches of different colors but a governor can enact laws. A governor can reverse jail sentences, build better schools and affect property taxes so more than just the chosen few can afford to buy a house. That matters. When the stakes are high its not like Tony Dungy or Lovie Smith can actually do anything for you. Yeah I know, its an esteem thing, we should feel proud because their accomplishments makes Black people look good and show the world what we are capable of doing when given the chance. We need to get past that. If people can’t see the accomplishments by now then we need to underline them and cram them down the throats of the non-believers. Last week we heard a lot about how this is a landmark event and this week we’ll hear more, meanwhile the world keeps spinning and the big issues are forgotten about. I’m not underestimating what this means but lets be real here. And yeah I know this is a basketball blog but let me live a’ight?