Written in verse, Kwame Alexander's book, The Crossover, keeps your fingers turning the pages for more. 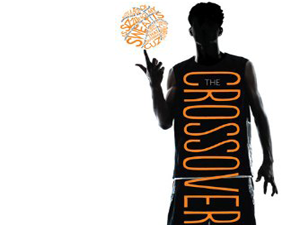 “Never let anyone
lower your goals.
Others’ expectations
of you are determined
by their limitations
of life.
The sky is your limit, sons.
Always shoot
for the sun
and you will shine.”

Author Kwame Alexander calls the above lines “Basketball Rule #3” in his book, The Crossover. Such a rule is in no way limited to the hardwood—it’s a life rule, and much like main character Josh Bell’s story told in heartfelt verse across 237 pages, it can relate to basketball enthusiasts and non-enthusiasts alike.

Junior high school student, Josh Bell aka Filthy McNasty, is the star on his team, along with his twin brother Jordan, nicknamed JB. The boys learned the game’s fundamentals from their father, a former pro who’s known as Da Man. Blues-loving and doughnut-eating Dad will coach from the bleachers during his kids’ games, while his wife, the principal of the boys’ school, keeps him and the twins in check.

Josh tells his stories in verse. He’ll narrate the play-by-play of his team, with each word and its typography playing a role in setting the scene:

His on-court commentary is but one aspect of the book, because basketball is but one aspect of his life—albeit an important one. Filthy’s adventures and troubles spill off-court too, when JB finds love and Da Man faces health issues. Filthy is left feeling lonely, a sadness he isn’t used to.

But with the game, determination to set problems with his brother right, and “Basketball Rules” like that quoted up top sprinkled between every few pages, Josh finds the will and the way to regain his basketball and bro privileges.

Alexander’s cool and touching read is one that keeps your fingers turning the pages for more. The book is like a down-to-the-wire game, with multiple lead changes and fast breaks coming in the form of Filthy’s life and experiences that deal not only with basketball, but family, brotherhood, tragedy, and acceptance.