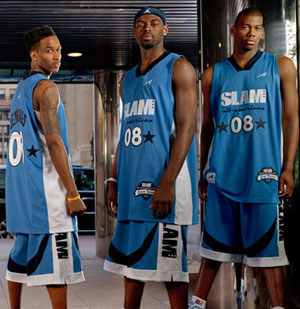 So we’re a little small on the wing. We don’t pick our annual high school All-American teams by position, so you can, we hope, forgive us for not having a true swingman on this year’s first team. Otherwise, we’d feel pretty good putting this five up against any NCAA quintet you might choose to field next fall.

For those of you who haven’t yet copped SLAM 119; or who live in far-flung places like Saudi Arabia, Ireland, or Centre County, PA…) and are still waiting for, say, SLAM 109; or who just don’t bother following this whole high school basketball scene, these names might not mean much. For the rest (hopefully most) of you, the names and games are at least a little bit familiar. They are, by our estimation, the five best players in the HS class of 2008. We should mention that “best” is kind of a dicey idea, because we’re basing our opinion both on what they accomplished in the high school ranks, and on what we expect them to accomplish on the next level(s). This is neither exact, nor is it science, but we do the best we can.

Here then, a quick little breakdown type-thing of who they are and why they’re here:

Tyreke Evans, American Christian Academy, Aston, PA: A 6-5 combo guard from outside Philly who’s probably the best-known name on this list, not least because he followed guys like Starbury, LeBron, and Kevin Love as a SLAM Basketball Diary keeper. Reke’s the sort of player who makes scoring look preposterously easily. He is strong and fast and fluid and gets to the basket whenever he feels like it, and sometimes even when he probably doesn’t. That’s how good he is. He’ll play at Memphis next season. He won’t “replace” Derrick Rose, because they’re not strictly speaking the same sort of player. But in the sense that they’re both really good and will have a massive and immediate impact on the program, it’s actually not a bad comparison.

Jrue Holiday, Campbell Hall, North Hollywood, CA: Approximately 83 percent of the really good players in the ’08 class hail from California (this is an estimate, but I think it’s close). Of those, this SoCal combo guard is the best. Because of his L.A. area roots, his ability to score and distribute with equal levels of excellence, and his college choice, Jrue (pronounced “Drew”) is sometimes compared to Baron Davis. We don’t know if he can grow a dope beard or will one day break into the movie business, but we do know he’s going to UCLA; if the Bruins make it back to the Final Four for the 19th consecutive season next year (again, an estimate, but a good one), Jrue will most likely have a lot to do with it.

Brandon Jennings, Oak Hill Academy, Mouth of Wilson, VA: When a player best known for his entertaining passing breaks the season scoring record at a place like Oak Hill Academy, you sort of have to put him on a list like this. Not that we ever doubted Brandon, but dude was next level this year, as his haul of National POY honors made clear. Kenny Anderson comparisons were the norm for this 6-2 point guard and L.A. native, but that get-buckets mentality increasingly has people thinking of a young AI. He’s not the first or last smallish scoring guard to wear that label in the past decade or so, but he might have the best chance of justifying the hype. If nothing else, he figures to make Lute Olsen’s return to the Arizona bench a lot more enjoyable.

Greg Monroe, Helen Cox HS, Harvey, LA: To those who are only sort of paying attention, the mild-mannered cat from just outside N’awlins is a Ewing or Mourning clone — because he’s a “big man” and he’ll be playing for JTIII at Georgetown next year. But think “big” more in the Al Harrington mode — a 6-10 shooter and slasher and general matchup nightmare. He can defend a little, too, and don’t think Coach Thompson won’t have him causing all sorts of trouble in the paint next year. But this is a new kind of Hoya big man, and the only real similarity he hopes to have with the likes of Pat and Zo is lots and lots of wins.

Samardo Samuels, St. Benedict’s Prep, Newark, NJ: We feel really, really badly for anyone who has to try and check ‘Mardo in college next season, because this kid’s a beast. After dominating the Jersey prep ranks for a minute, the burly, 6-9 Samuels will be down in Louisville next fall, where he figures to give Rick Pitino the sort of no-joke post presence he’s been lacking in recent years. He’s a bad man.

And once again, team MVP honors go to our man Nando at Athletes Basketball, who blessed us with the lovely uniforms pictured here. Thanks, Nando!