The prestigious Hoophall Classic is known for annually converging some of the world’s top prep talent in Springfield (MA) during MLK weekend. And as was revealed earlier today, the 2016 field will be as star-studded as it has always been known to be. Below is the official release and schedule from the organizers.

The Naismith Memorial Basketball Hall of Fame announced today the field of teams and game schedule for the 2016 Spalding Hoophall Classic, an annual basketball showcase now in its fifteenth year at Springfield College. Games will be played at Blake Arena on the campus of Springfield College January 14-18, during Martin Luther King, Jr. weekend. The nation’s premier basketball event will once again showcase the top high school basketball teams from across the country. This year’s elite matchups include Oak Hill Academy (VA) vs. Mater Dei (CA), DeMatha Catholic (MD) vs. Chaminade College Prep (MO), and Athlete Institute (Canada) vs. Hillcrest Prep (AZ).

Other exciting matchups will feature Montverde Academy (FL) vs. Sierra Canyon (CA), Paul VI (VA) vs. Chino Hills (CA), St. Anthony (NJ) vs. Bentonville (AR) and Findlay College Prep (NV) vs. High Point Christian (NC). Extensive coverage of the 2016 Spalding Hoophall Classic including game stories, videos, stats, photos and player interviews will be provided by USA TODAY HSS and MassLive.com. GameChanger will serve as the official stats provider of the event with live updates available online. Additionally, several games from the 2016 Spalding Hoophall Classic will be nationally televised and streamed live online by The Cube. Television broadcast information will be released at a later date.

“For the past fifteen years we have been fortunate enough to host the top high school teams in the nation at the birthplace of basketball, Springfield College,” said John L. Doleva, President and CEO of the Naismith Memorial Basketball Hall of Fame. “We expect this year’s field to be especially competitive and we look forward to welcoming each team to the Basketball Hall of Fame in January.” 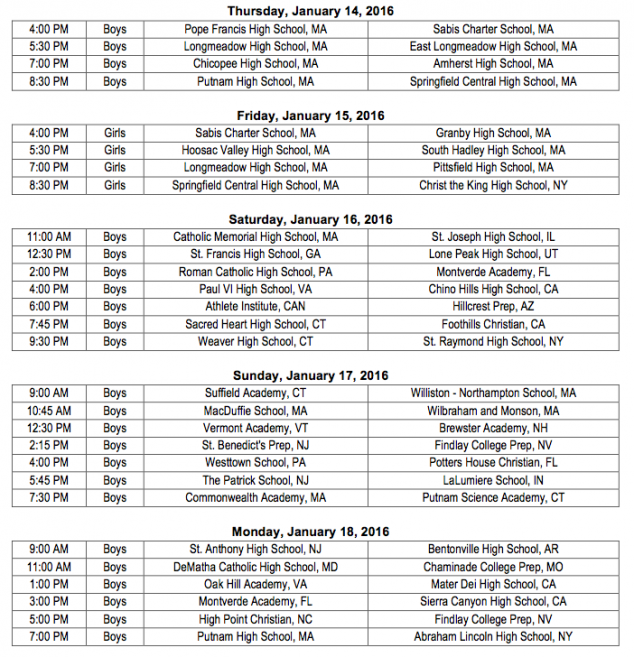