Last week, the Under Armour All-America Camp was held at Philadelphia University and featured some the nation’s elite high school players from the classes of 2018, 2019, and 2020. The morning sessions focused on skill development, in which coaches reinforced different nuances of the game such as spacing, ball screens and shooting, and offensive sets. The afternoons and evenings consisted of full-court games.

Also participating in the camp were 21 college basketball players from some of the top D1 programs in the country. The college participants also partook in skill work during the morning sessions, and played 5-on-5 games in front NBA personnel.

Scores of college coaches, scouts, and media outlets were on hand to observe the talent. Here are a few of the high school players that stood out:

Dotson was without question the best player at the camp. Throughout the week, he played with tremendous poise and maturity. He routinely blew past defenders when attacking the basket, and also displayed incredible body control when finishing at the rim. When he wasn’t scoring, he masterfully found open teammates when the defense collapsed. He was an absolute terror on the defensive end, demonstrating good lateral quickness against opposing ball handlers. Dotson, who is hearing from schools in the ACC, Big Ten, SEC, and PAC 12, was easily the most college-ready guard at the camp.

After guiding the Canadian National Team to a silver medal in the FIBA Americas U16 Championship, McNeilly showed no signs of slowing down in Philly. Blessed with great size, McNeilly displayed the capability to facilitate or create shots for himself and his teammates. He also finished his strong drives to the hoop through contact. McNeilly has the athleticism and wingspan to be a disruptive force on the defensive end. He will need to spend some time in the weight room in order to prepare himself for high school ball in the States this season. When it’s all said and done, McNeilly will be coveted by some of the nation’s high major programs. 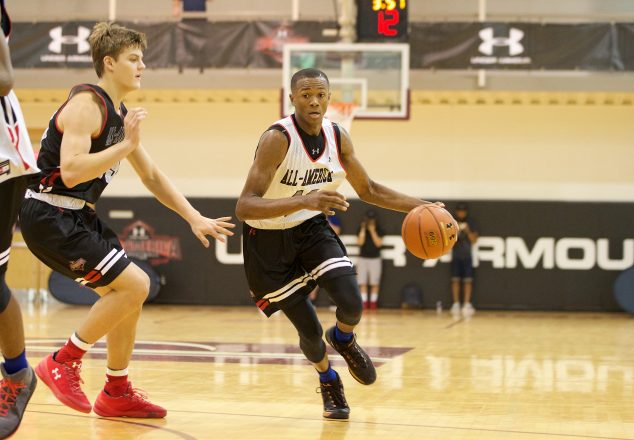 There may not be a more explosive two-way player in the 2019 class. Aside from his impressive aerial assaults on the rim, Lewis has always been known for his defensive prowess. While that continued, Lewis made a concerted effort to be more aggressive on offense. On opening night of the camp, he showed the ability to score on all three levels while finishing with 11 points and hitting the game winning three-pointer. Lewis has offers from a slew of schools in high major conferences.

They don’t make 14 year olds like they used to. No need to adjust your eyes or wipe your glass lenses, the previous sentence was correct. Jaden Springer is only 14 years old but doesn’t play like one. Aside from his stature, the freshman stud boasts remarkable athleticism that allows him to play above the rim. He scored the majority of his points in transition—converting several layups after absorbing contact. Jaden will be a major contributor for his team this season.

Simons may be the most explosive scorer on the Under Armour circuit. He possesses an innate ability to find his shot in almost any situation on the court. Throughout the camp, he demonstrated the capability to manipulate his defender off of ball screens, and shoot consistently from long range. If he continues to improve his strength, Simons will be an impact player by the time he arrives at Louisville. The Cardinals are getting an absolute stud.

Regarded as the number one center in the 2018 class, Brown used his size and strength to score in the post. Brown also showed sensational agility in the open court by snagging rebounds and pushing the ball to start the break. On the defensive end, he has natural ability to change and block shots due to his formidable size. If Brown continues to hone his offensive package, his game will go to another stratosphere. It’s no coincidence that Brown has garnered the attention of every high major program in the country.