A Brief Conversation with #44 Tyrelle Blair of Boston College 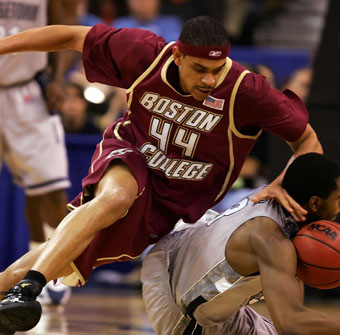 Words and Interview By: Sammy Newman-Beck

Growing up in the Boston area tends to have an affect on your team preferences. For example, I am a die-hard Celtics fan! And it is now, thanks to the Big Three that I finally can be proud of them. I am also a Red Sox fan, and while I do not hate the Yankees as most do in this ever so eccentric city, I love the team with the B on their hats. I am also a Patriots fan, however…growing up with a father from Queens, I have become a New York Giants fan to the death, and amidst much agony over the past years, I can now be proud of them. In turning to college sports, I love Boston College. While I am a collegiate basketball player myself (Shout outs to D-III Emerson College—we’re 16-3 right now) I love to see basketball played at a high level and thoroughly support our home team in Boston College.

After transferring to Boston College from Loyola (Chicago) starting Center Tyrelle Blair has grown into a legitimate shot-blocker. Averaging 4.1 blocks per game and entering this week ranked 4th in the country in that category has only solidified the doubters (which include his hometown Florida State University, who did not offer him out of high school). After sending off two NBA players last year in Jared Dudley and Sean Williams (another shot blocker in his own right) BC has struggled a bit this year. With a starting lineup consisting of one freshman (Rakim Sanders), two sophomores (Shamari Spears, Tyler Roche), one junior (Tyrese Rice) and a senior in Tyrelle, BC has had some lumps. With a long run in the ACC left to go, and one night after they lost to Clemson, senior big man Tyrelle Blair sat down with SLAM to vent, express his desire to win and his passion for working hard.

(During the process of the interview there was a problem with the recording device. This will be a two-part interview)

Tyrelle: Man…We’ve been getting smacked. We’re not guarding anybody and we’re not playing defense.

SLAM: Why do you think that is?

SLAM: What do you think is the difference between this year and last years team?

Tyrelle: I think last year we had guys who fit our system a little better and guys who wanted it more. We had Jared (Dudley) who basically controlled the tempo of our game. A lot of people forget, but two years ago we had Louis (Hinnant—now overseas) who only averaged about 7 points a game. But Louis played defense man!

SLAM: Boston College usually gets guys from other parts of the country, what made you choose to go to BC?

Tyrelle: I chose to transfer to BC because it’s first and foremost in the ACC. It’s also a great school. My mother always said you have to have a backup plan for after college in case you get hurt. So I figure BC was my best option to get a degree and it will benefit me a lot. In high school I went to Florida High, which is an affiliate of Florida State. And the coach didn’t recruit me so he must of figured I wasn’t good enough. When I decided to leave Loyla, he contacted me, but I figured why go somewhere where I wasn’t wanted in the first place. So I decided I wanted to go to a place where we play them, and BC was that place.

SLAM: And how has it been playing them?

Tyrelle: Well I hit the game winning shot against them last year, so it’s been pretty good.

SLAM: Coming from a smaller school like Loyla to a school in the ACC what have been the major adjustments?

Tyrelle: Well it’s been a much faster game in the ACC. At Loyola there were a couple great players in the league but here in the ACC each team has 3 or 4 great players. Personally I’ve had to adjust to a much quicker game and learn how to block shots and rebound without fouling.

SLAM: What has been the toughest place to play in the ACC?

Tyrelle: I would have to say…Virginia Tech. Most people would think Duke or UNC but they have nice gyms and good atmosphere’s’ whereas VT doesn’t have a great arena and it’s not a nice place to play.

SLAM: What team has impressed you the most?

Tyrelle: Well…I would have to say UMass Amherst. UMass has some really good players in Gary Forbes and Ricky Harris and they play real hard. Man, they play hard! Also, their league is real good this year. I heard they might have 4 or 5 teams make it to the tournament this year. They have a funky style of play man, but boy, they play hard.

SLAM: Has any player particularly impressed you?

Tyrelle: Sean Singletary of Virginia and Trevor Booker of Clemson. I know Virginia is having a bad year, but if they didn’t have Singletary they would be like 4th or 5th in the A-10 let alone the ACC. And Trevor Booker is a beast. He’s only 6’7 but he plays like a Center. If he was 6’9 he’d be a first round draft pick no doubt. I have a lot of respect for him, he plays hard.
Photo courtesy of Getty Images