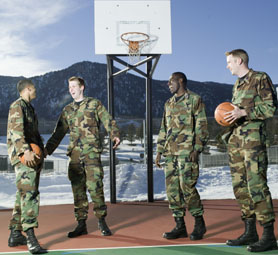 It is now about 630AM Monday morning here in the Denver area and despite watching the entire selection show yesterday, I haven’t printed out a bracket yet.  Normally at this point, I am knee deep in my pool (singular, I am apposed to multiple brackets) but today I am salty.

As many of you know, I recently penned a feature on the United States Air Force Academy squad for issue #107.  Yesterday, “the powers that be” in Indy thought very little of the Falcons’ season and omitted them from the NCAA tournament.  As writers, we are always a bit loyal to the subjects of our pieces; however, this one is even a little different.

First, they are one of the few semblances of a Division-I program in my geographic area, and having no representatives from Colorado is weak.  Also, about 15 years ago I was just days away from signing and becoming a member of that same very team, but decided to check out some schools out east.

While I will take nothing away from the teams that were named yesterday, I must nitpick some to prove that this squad more than proved itself worthy even over a few of the teams that were named.  Yes, I’ll start by admitting that the Falcons were pretty bad down the stretch of the season.  They had lost 5 in a row and again were eliminated in the first round of the Mountain West Conference tourney. BUT………..

1.) They were ranked in the top 25 for almost the entire season, reaching as far as #11 with just a few weeks left in the season..
2.) They won 23 games in a tough MWC.
3.) Their non-conference schedule included teams from the Pac-10, ACC, Big-12, and the Atlantic-10.
4.) They had double-digit wins over tournament teams, Texas Tech and George Washington, both at neutral sites.
5.) They had a 36-point win AT Stanford, who at 18-12 were one of the last teams named to the field.
6.) The Falcons also had 30+ point wins against big conference teams, Colorado and Wake Forest.
7.) They held the nation’s longest home winning streak before losing it in a tight battle with conference rival and tourney-invite, BYU in the season’s last game.

What am I missing?

Old Dominion can thank George Mason’s run last year for their bid.  At 24-8 they had basically the same record as the Falcons, from a similar (at best) conference.  Their signature wins were…… I can find a one.  While they had some nice wins in the Colonial (in which they won neither the regular season nor the conference tourney), they lost at home to Clemson and Winthrop, and suffered double-digit defeats at Virginia Tech and MARIST!?!?!?!

While I was a bit annoyed by the surplus of average teams from the power conference, including Illinois, Georgia Tech, and Stanford, I also feel that any time a service academy wins 20 games (especially with a schedule like the one AFA sported) they should be automatically put in the Dance, period.

My only reasoning for why Air Force was left off was the BCS effect.  The end of the season, for some reason, counts at least three times as much as any point in the season. I also heard that the previous record for D-I teams with 20+ wins was 78, and this year there were something like 104, making it the toughest decision to date.

I’m sure that I’ll get over it at some point today, but I’m just heated.

For the record, I like Kansas, Florida, and Georgetown.  Due to my anger, I don’t even know if they are in the same brackets; time to print one out, I guess.