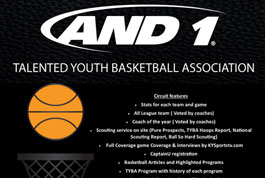 On Saturday May 21st and Sunday May 22nd, Session 2 of the Talented Youth Basketball Association (TYBA) circuit took place in Louisville, KY. The participating teams brought the intensity up a notch for the final session before the slated Finale in Atlanta. Each game this session was counted for seeding, with a trip to the ATL for the July 8-10 Finale on the line.

Below is a run-down of the top performers:

17u/Unsigned Senior Division– D1 Elite and Team Vision Blue finished atop of the standings with only one loss in the Talented Pool, while BBA Kings and Team Vision White did the same in the Skilled Division with only 1 loss each as well.

16u/ 10th grade Division– Ohio Crossover leads the Polished pool division, while the Gifted pool is led by Team Vision.

15u/ 9th grade Division– Team Vision 15u sinished on top of the Hustle pool, while Charlotte Court finished Session 2 with an undefeated record and the top spot of the Hardwork pool.

Strong point guard that showed the ability to attack the rim.

Super athletic wing that attacks the rim in a hurry.

Sharp shooting PG that can take over a game by scoring or getting others involved.

Solid big man that rebounds well and has strong post moves around the block.

Sharp shooting PG that stepped up to lead his team in Session 2.

Proved his ability to finish around the rim consistently.

Athletic wing that is getting better each session.

Strong player that proved he can knock down the outside shot in session 2.