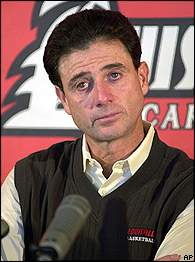 Welcome to the BabyLinks. I’m still trying to figure out a name for this.

But this, folks, is why we have a comments section. Help me out. This section needs a name.

Onto the news from the Month o’ Basketball Purgatory.

In a lead that’s straight out of a tamely filled-in Mad Libs page, Rick Pitino is blogging in Canada. He’s using nicknames for freshman and I’m very, very confused. They only got past Ottawa by eight, but, then again, Larry Bird is not walking through that door.

Side note: Why is Rick Pitino’s website better than that of the NCAA’s? Why is it more accessible than MTV’s? What other 54-year-old guy do you know has the entire Jock Jams Volume 15 album on his website? I did not know Rick Pitino was a 50 Cent fan.

You can even ask him questions. Say, you can ask him what percentage of time Louisville will be playing a zone. Or you can be that guy who catches him forgetting Mark Pope’s first name.

Don’t be that guy. Like you remembered his first name anyway.

Is there a curb big enough to kick 6’10”, 250 lb. center Major Wingate to? If there is, would you want to be the guy in charge of that sort of thing? Especially when his name is Major?

Glad to see the karma police didn’t catch up to Duke in surgery form. Paulus and McRoberts are fine, henceforth Duke is fine, henceforth I am not. Here’s to many healthy, hearty missed layups.

Oh, and I guess Kareem is kind of a litterbug. Does anybody else have this image of him skyhooking his bag of blowguns over a picketfence and high-fiving a very lost Bill Walton in full Laker garb?