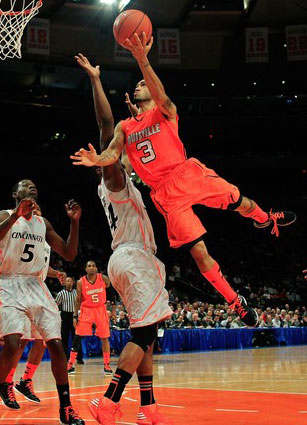 A week’s worth of fantastic basketball at the Garden culminates tonight as the seventh-seeded Louisville Cardinals take on the fourth-seeded Cincinnati Bearcats in the Big East Championship game. While this may not be the matchup fans wanted or expected, it still has potential to be a great climax to a what has been a great tournament.

The Bearcats are the favorite after defeating the number-one seeded Syracuse Orange in last night’s first semifinal game. Cincy’s ride to the final has been one of the better stories in the country. After a nasty brawl during their rivalry game with Xavier put them in negative connotation amongst fans, the Bearcats have battled through adversity and now find themselves one win away from a Big East Championship and a likely high seed in the Big Dance. The much maligned Yancy Gates has been playing outstanding basketball all week and came up huge during the second half of last night’s game. While Gates handled all the dirty work, Sean Kilpatrick showed his offensive prowess. The Second Team All-Conference selection finished with 18 points in the win over Syracuse and hit a few huge shots down the stretch to lead his team to victory. Tonight marks the first time in school history that Cincy will be playing for a shot at the ‘chip.

The Cardinals are healthy for the first time in a long time, and Rick Pitino feels confident in his team’s chances both tonight and in the NCAA Tournament. Point guard Peyton Siva has finally looked like the Peyton Siva of old; during last night’s semifinal against Notre Dame, Siva was unstoppable. The Irish guards had no answer for him as he finished with 13 points, 9 assists and 8 boards in the blowout dub. For Louisville, it really boils down to which Siva shows up. If he continues to push the ball and play his game, they will find success, but if he struggles, as will the rest of the team. He will be the main focal point defensively for the Bearcats and is the X-Factor in tonight’s game.

Selection Sunday is tomorrow, and tonight’s game should be a good warmup for the real madness that begins this upcoming week.

— Much bigger turnout than I expected for this one being that Syracuse was eliminated. Decent mix of both Louisville and Cincy fans, but overall, crowd seems pro-Bearcat.

— With is brother in attendance, Chris Smith knocks down the games opening bucket with a corner 3.

— First media timeout and it’s only 3-2. Louisville playing in a zone, Cincy had success against ‘Cuse’s 2-3 zone last night because they hit shots early, not the case tonight.

— Cincinnati shooting nine percent from the field; Louisville, 25. Somebody do something.

— Under 12 media timeout and its 6-5, I saw better offense in this morning’s America East Championship game.

— Great layup by Siva right in front of me, dude has major bounce, should have gotten a foul as well.

— Chris Smith goes down hard, but looks like he’ll be fine. Good news for Louisville, he’s been their only offensive threat so far.

— Coach Cronin calls a timeout and is chewing his guys out on the sideline. Both teams looking breathing heavy on the sidelines, fatigue will definitely be a factor as the game wears on.

— Bearcats look like a completely different team than the one who took the court against Syracuse. Can’t buy a bucket, not attacking the rim and offense is stagnated. Lucky for them, Louisville doesn’t look much better so it’s still a game at 14-8 with 7:49 left in the first half.

— Louisville’s pep band currently performing a rendition of the Big Tymers’ “Still Fly,” best part of the game so far.

— Pretty reverse layup from Cashmere Wright gets the crowd back into it, 14-10 with 6 minutes left in the half. Kuric responds with a three of his own, hopefully things continue to pick up.

— Peyton Siva with the great dime to Chris Smith–right now Siva is my MVP of the tournament. Kid has been on another level than the rest of the field.

— Cincy switches to a zone to force Louisville to hit their jumpers–good choice: Cardinlas shooting 35 percent from the field.

— Peyton Siva limps off after tumbling into the crowd. Uh-oh.

— The Cardinals take a 24-14 lead into the half. Can they hold on, or will the Bearcats find their rhythm in the second half. Stay tuned.

— Huge block by Deng on the attempted layup, Peyton Siva with the turnover on the other end. Picking up right where we left off are we…

— Yancy Gates with the dunk and one, Louisville responds with the three, Cashmere right hits ’em right back with a three of this own. PLEASE keep this pace up!!

— Cincy has played themselves back into the game, now a five-point contest. Bearcats have been buckling down defensively and finding a little rhythm on the other end.

— Cardinals respond nicely, push the lead back to eight, not without the help of a few Cincy blunders though.

— Teams trading buckets now, game flow, physicality all picking up. Hopefully the last 12 minutes will make up for the previous 28.

— Bad, bad foul on Sean Kilpatrick. Sends Kyle Kuric to the line for 3 and a chance to push the lead to nine.

— Chane Benahan with the big block on Parker leads to a Kyle Kuric layup on the other end, lead now eleven. Bearcats letting this one slip away.

— The Bearcats haven’t gone inside to Yancy Gates at all and I can’t figure out why. Louisville has no one inside who can contain him, Cincy instead living and dying on the perimeter.

— Chris Smith with the three-pointer to push the lead to 16, they may have been the dagger.

— Cincy three-pointer cuts it to 11 with 6:15 remaining. Cincy down to their last timeout, a lot of questionable coaching decisions on Cronin’s behalf.

— Wow, great move and layup by Siva. Cashmere Wright comes back with a quick crossover and layup of his own. 8-point game.

— All of a sudden it’s a six-point game after a Yancy Gates power move inside.

— Bad officiating there, Cincy’s Justin Jackson gets hacked but no call, instead calls an offensive foul on Jackson after a weak push. C’mon man.

— Parker leaves one short, sends the next long then commits an over the back foul. Tough break for a kid who has carried his team in the second half.

— Russ Smith hits both of his free throws and that should do it. 25 seconds to play.

Louisville’s victory wraps up a great week of hoops at the Garden, but only great things are on the horizon as the NCAA Tournament field will be settled by this time tomorrow night. Can’t wait.