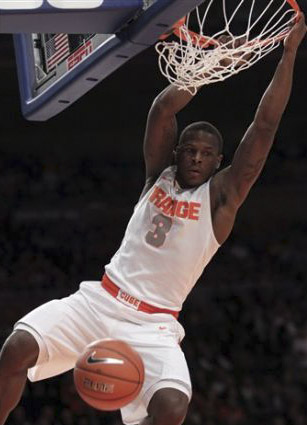 The Big East Tournament is the best week-long competition in all of college basketball outside of March Madness. Held at Madison Square Garden, its slate of games dwarfs all other tournaments played out around the country and there’s a certain allure to the games being held in the Mecca of Basketball. There have been countless unforgettable moments over the years including Syracuse and UConn’s six overtime marathon game, and most recently, UConn’s incredible five wins in five days that propelled them into the Big Dance and into an eventual National Championship.

This year’s tournament has been no different. While the opening round games left something to be desired, yesterday’s quarterfinal matchups are what makes the Big East so great. Three out of the four competitions came down to the wire, including a double overtime thriller between Cincinnati and Georgetown, an overtime defensive battle between Notre Dame and South Florida and another classic Syracuse-UConn matchup.

Tonight, we have two great semifinal matchups between the Bearcats of Cincinnati and the Orange of Syracuse University followed by the Fighting Irish and the Louisville Cardinals. The Cincy-‘Cuse matchup is one to really keep an eye on. The Bearcats are coming in hot, having won six out of their last seven and are led by All-Big East Second Teamer Sean Kilpatrick and Yancy Gates. They are a throwback Cincy squad–they play a tough, physical brand of hoops and will challenge Syracuse to with their physical play.

The Orange have lost one game all year and have remained focused on the goal of a National Championship despite a seemingly non-stop string of scandals that have surrounded the program. ‘Cuse is a senior-laden team led by Kris Joseph and Scoop Jardine who are looking to go out on top during their last go around. Boeheim’s patented 2-3 zone has been giving teams fits all year, and with center Fab Melo holding it down in the paint, ‘Cuse looks ready to make a run in the tournament. They undoubtedly have a number one seed in their sites, and a Big East Championship will only help their cause.

While the Notre Dame-Louisville matchup isn’t as marquee as the first game, it should be a good one as well. The Cardinals are led by Peyton Siva who is one of, if not, the best point guard in the conference and Rick Pitino has championship experience. Louisville ran away with it last night against favored Marquette, forcing them into bad shots and turnovers all night. If the Cardnials can get hot from outside, they will be tough to beat.

The Irish have been one of the biggest surprises of the season. They came out of nowhere and reeled off nine straight conference wins, including an upset of Syracuse. Coach Mike Brey does an outstanding job year-in and year-out of having his team ready to play despite a talent gap between the Irish and the top teams in the Big East. ND lives and dies by the three, but when they are on, they are fun to watch. The lack star power, but make up for it with quality team play and hard-nosed defense. If they win tonight, they will be in the Big East Final for the first time in the school’s history.

Unfortunately, this will be the last year that the tournament will be held with it’s usual array of squads. Both Syracuse and Pittsburgh will be heading to the ACC and West Virginia will be playing their ball in the Big 12. Coming in are Memphis, SMU, Houston and Central Florida. The tournament will still play on, and more great moments are sure to come, but it will never be the same.

I’ll be here taking you through both of tonight’s matchups, so sit back and enjoy and drop a comment if you feel the urge.

A few thoughts before things get underway:

-Sitting next to Syracuse alum John Wallace. Things are definitely off to a good start.

-The Big East is obviously going to miss ‘Cuse next season, but the impact will be felt ten-fold during Tournament week. There fans travel better than any team I have seen, Garden will be close to sold out for their game.

– Not sure how I feel about Cincy’s new uni’s. They’re kind of dope, but the shorts give off a serious Zubaz vibe.

– Earl Monroe in the house as well!

— Both teams start in a zone, high-energy in the Garden and it feels like a Syracuse home game

— Kilpatrick breaks the scoreless tie with a 3–kid grew up not too far from Manhattan, must be awesome for him to play in this environment

— Cincy doesn’t look rattled at all, they’re moving the ball nicely and getting good, open looks. They are also matching ‘Cuse physically, which will be a huge factor this game.

— Refs have swallowed their whistles and are letting ’em play

— Cincy has silenced this pro-Orange crowd with a tremendous gameplan and execution. Sean Kilpatrick is cookin!

— Huge alley-oop to Fab Melo brings the crowd back into it, but Cincy responds with a 3 pointer of their own. ‘Cuse down 15 early and look a bit shell-shocked

— 12 and a half minutes in and not a single fouls been called. Can be read one of two ways: refs are letting them play, or showing no sympathy towards ‘Cuse who will be leaving the Big East following this season. A few questionable non-calls towards ‘Cuse and Boeheim is having a long talk with the refs during the media timeout

— Jadakiss has entered the building!

— Cincy is on fire, shooting 75 percent from behind the arc

— ‘Cuse looking stagnant offensively, a lot of standing around and watching–looks like that other team who frequents the Garden

— Yancy Gates with the offensive rebound and putback to start the second half. Syracuse picking up where they left off

— Yancy Gates with two straight offensive rebounds and put backs, Fab Melo has been surprisingly ineffective inside for ‘Cuse

— Breakaway dunk from Brandon Triche followed by a taken charge has the crowd back into it, could be a turning point in this game

— Interesting stat from ESPN: “Orange are 8-for-25 (32 percent) in the first half against Cincinnati’s zone defense. They entered shooting 44 pct vs zone this season.”

— 3-pointer from Waiters cuts the lead to single digits

— Refs went from swallowing their whistles in the first-half to having already called seven fouls in the second half, there’s been shoddy officiating all week

— Yancy Gates has been the difference maker thus far in the second half. Already has 3 offensive boards and is making Fab Melo obsolete

— ‘Cuse hits a shot, but Cincy keeps responding, they’re not rattled at all despite the crowd rooting against them

— Brandon Triche coming up huge for ‘Cuse as they pull within seven. Press starting to bother the Bearcats

— Dude just hit a halfcourt shot during the media timeout!! Just won himself a year’s worth of jeans. How many pairs is that exactly?

— Dion Waiters just made his defender fall before hitting a 3, kid is showing out right now

— Five and a half left to go and it’s a five point game. Another OT game on deck? Would only be right after this week

— Dion Waiters has been carrying ‘Cuse in the second half– hits a three then comes back and gets a huge steal, still a five point game

— John Wallace is wildin’ out next to me. Legitimately scared for my well-being.

— Sean Kilpatrick with a potential dagger 3 and a steal on the other end! Had a quiet second half but more than made up with it with those two plays.

— Four point game with 25 seconds to go…Can ‘Cuse pull it off?

— Dion Waiters makes it a two-point game with a huge three…here we go!

— Wow, Syracuse gets caught slipping and leaves a wide open Bearcat who dunks it home for the exclamation point. Dion Waiters nearly one the game by his lonesome, but Cincy held on after a hot start behind Yancy Gates and Sean Kilpatrick. Great game, and another one to come!