Boston College or: How I learned to stop worrying and love my first-round pick 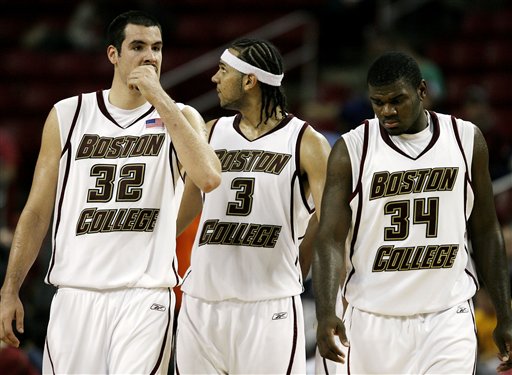 This is what happened last night. One of those make-you-cringe type losses that shouldn’t have happened to begin with. One of those losses that no one on the Boston College campus knows about until the next morning because half the campus didn’t even know they played. No BC student or alum should ever have to wake up to read “Duke 86, Columbia 43… Washington 102, Nichols State 74… BC 63, Vermont 77” on a ticker in the morning.

Not with this BC. Not with the 14th ranked team in the country. Doug Flutie should be pissed.

This is why it won’t happen again.

“With Jared Dudley — regardless of the competition — these are the results,” said Boston College coach Al Skinner, pointing down to a BC-New Hampshire box score.

Nineteen, 11 and 4. BC 86, UNH 47. A prototypical, ACC-team-dominates-an-America-East-team shellacking. Just the way it’s supposed to be, Dudley made UNH seem just as foolish as Vermont made him look Monday night.

For a while, it looked like he was toying with the Wildcats on Friday. UNH took one of those 9-4 early leads that you always see from mid-majors who are in over their heads. But one quick dump pass to Jared Dudley in the post and everything seemed to be O.K. again.

“He’s not a 30-point guy, like a Troy Bell” said Skinner, pointing back to BC lore of all of five years ago. “This is who he is. We’re not asking him to be anything more.”

But maybe they should.

The Eagles lost two seniors that led the charge in a 2006 Sweet 16 run that was based entirely off of experience and brute force in the paint. A couple of months later their toughest under-the-basket warrior, Craig Smith, is one of the NBA’s best rookies in Minnesota and helping Kevin Garnett pick fights, Louis Hinnant is in Europe or Israel or the NBDL or the fry-o-later, and BC had nothing to show for it.

That was until Friday night, when Shamari Spears looked like he had BC covered at least in the tenacity department.

The 6’6″, Big Baby-esque power forward looked like a grizzled veteran, too. Or at least his stat line did. His 23 points on eight-of-ten shooting led the team and his four offensive rebounds helped wear out New Hampshire. Outside of some opening night jitters, he didn’t feel like he was playing his first college game.

“There was a lot of pressure. You’re playing next to all of these high profile players and you’re just worried about playing your role,” said Spears. “After a while, I felt my groove.”

Dudley was just as excited about his new frontcourt partner and had some possibly premature comparisons to a certain All-ACC power forward of old.

“Both have soft hands, and Shamari might be better (than Smith)with offensive rebounds,” said Dudley.

But Dudley and Skinner may have spoken too soon and Skinner alluded to it in an eerily prophetic press conference diatribe after the UNH demolition.

“New Hampshire is a decent low, mid-major, but we’re gonna see better,” said Skinner. “We’re gonna have to continue to improve if we want to achieve the type of success that we want as the season goes along.”

Little did they know that they were going to see that much better that quickly. That booming freshman who was supposed to be the enforcer in the paint? Four total rebounds on Monday night. The two-headed point guard making up for the Hinnant’s departure? Marquez Haynes and Tyrese Rice shot a combined 6-25 against the Catamounts. (What’s more frightening? Two point guards shooting 24% or two point guards shooting the ball 25 times in the first place?)

And what was the one constant from Friday to Monday night? Jared Dudley. Nineteen, 14 and 2. Maybe he’s going to have to step up more than Al Skinner thinks.
From what Skinner has seen of his senior co-captain, he doesn’t foresee Dudley’s leadership abilities to be too big of a problem. In fact, he thinks it’s his forte.

“He’s a very good leader,” said Skinner. “He has an understanding that he’s supposed to lead this team, but he also has respect from his teammates. When they follow and listen to you, that makes him a good leader.”

Right now, Dudley is this team’s regulator. He’s their consistency. He’s their sticking point. And, because of it, he’s probably not a first round pick.

Draft workouts won’t be his finest hour, either. He’s a grower and a bruiser and he’ll outlast anyone. He will wear you down and he will make stops. He will work for his points and you’ll work for yours. This kid doesn’t know how to not play hard; he was diving for loose balls and worked for a putback layup to make the score 72-39 on Friday. But workouts aren’t long enough to show that.

By the end of Friday’s blowout, Dudley was able to show off his entire repertoire. He displayed his range with a contested second-half three. He worked the offense from the high post, catching Tyrese Rice with a laser pass for a backdoor layup. He did it all working just as hard, simply from better places on the floor.

Sure, it might snap Al Skinner’s system right in half and he might have to buy a whole lot more chalk, or maybe even a new chalkboard. But if this type of play stopped being an experiment and started being a common occurrence, something even sweeter could come out of this season’s tournament than last year’s third-round exit. If Al Skinner gave Jared Dudley a chance to lead this team just as much on the court as he does off the court, they could utilize this college star for what he actually is: a first round pick.

“I’ve been waiting for this opportunity all of my life,” Dudley said of his newfangled leadership role.

Now it’s just time for him to show it.

-Friday was my first experience being decked by a loose ball on press row. UNH guard Tyrece Gibbs put our StatViewer out of commission and I heard from a certain UNH athletic trainer (who happens to be my brother Chris — I’m not Craig Sager) that he paid for it later with four stitches. That’ll learn ’em.

I imagine this is what it’s like being punched by a very passive, very weak D-List celebrity. Like Verne Troyer or Screech pre-Celebrity Boxing.

– Sean Marshall’s weave hairdo should be in a museum.

– BC can blame the Monday loss on not having junior rotation player Sean Williams for the first two games of the season. He was suspended for distributing counterfeit $20 bills.

That’s one thing I never got — counterfeiting small denominations of money. Why not just go ahead and counterfeit a c-note? Is it because you don’t have one to begin with? I’m seriously curious here.

– Oh, and if you think I wasn’t finishing up a column during the BC-Vermont game about how BC will never get lackadaisical against midmajors this year, you obviously have no idea what karma is.