Championship Week: deliver me from the office 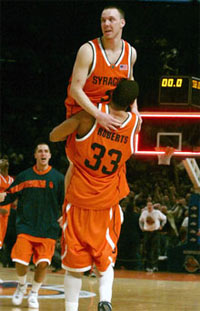 I love working at SLAM, but I have to say that this is one crappy week to be shipping an issue. ESPN has effectively renamed this week Championship Week, and were it not for my J-O-B, they would be getting a lot of my viewing attention the next few days. Here’s the deal with Championship Week: it’s heaven if you’re at home and/or camped out at a bar. I have an affinity for two things it is connected with—college hoops and sports at odd times. Any time I’m watching a live sporting event when most people are sitting at work, I feel like I’m getting over. Well, there is probably not a better week than this one for live sporting events during business hours.

It started slowly with some spring training baseball yesterday, picked up with Champions League soccer today (Barca out to Liverpool? Damn.) and goes absolutely buckwild tomorrow when the Big East Tourney kicks off. By Thursday you’ll have more college tourney games on then you could possibly watch. When I was in college, it was a wrap for classes this week as I camped out in my room and loaded up on the hoops. And that was the old days of the mid-90’s, when there were many fewer games on then there are now. Shoot, the Big Ten had just started it’s postseason tourney then and the Pac-10 didn’t even have one yet, and there were still mad games on. But nothing like the extravaganza of early March, 2007. Between noon tomorrow and 7 PM Friday, ESPN’s family of networks will broadcast 20 men’s college games during SLAM office hours. And the worldwide leader doesn’t even have a monopoly on this panoply of college hoops. Here in New York there are also Pac-10 games on Fox Sports (thankfully many of these air late at night because of the time difference) and women’s games on at all sorts of odd hours as well. Elsewhere in the country I’m sure there is some nice coverage of slept-on tourneys like the Mountain West and the WAC.

One tournament that I couldn’t watch any of this week even if I had no job is the Atlantic 10’s. This is relevant since I mentioned my own college days before. Well, I went to George Washington, which you should know plays in the A-10. The A-10 was once a rising star in the college hoops world but now—while conferences such as the Missouri Valley and Colonial Athletic have become media darlings that understand how to manipulate the selection committee—it doesn’t seem to have a single program (out of 14; as a league it can’t count) that knows how to spell RPI. For real, we are now basically a one-bid league. Where have you gone, Coach Cal and John Chaney?. Now the league is a joke, and this week’s tournament sums up how far it has fallen. Pardon my sounding like an old man, but in my day the A-10 Tourney was on syndicated TV throughout the East Coast and it was held at the tradition-steeped Palestra in Philadelphia. This weekend’s tournament is being held in Atlantic City (classy, huh?) and is being shown (save for the championship game) on CSTV, a channel I have never seen in my life. Way to go, A-10. At least I won’t be missing any of those games being at work.

Thankfully, while many of the obscure games of the midweek will be done, Saturday is still a college hoops fest, and I plan to indulge. See you then, couch. As for you lucky Slamonline readers who are still in college or have some other life circumstance that allows you to watch the games this week, let me know what I’m missing…